Activism can come in many different forms. It can come in a protest, a boycott, or even a work of art.

Artists worldwide have found creative ways of expressing their political ideologies on how the world can be more progressive. Mona Caron is one of many artists who has used large-scale artwork to communicate her artistic capabilities and advocate for a more progressive future.

Mona Caron is an “international” artist in several respects due to her being Swiss-born and currently based in San Francisco. Her multi-disciplinary approach to art includes utilizing muralism, illustration and photography.

I was fortunate to be able to ask Mona a few questions about her work. She discussed what led her to be a muralist and how it has affected her work. “When I did my first mural, I was invited to do a mural in San Francisco, and I had no idea about how to go about it, but the experience went from a one-time adventure to a transformative experience,” said Mona.

Mona saw how doing murals changed her work ethic and even her personality. She highlighted how before, she was a “shy artist” who did not like to show the messy process of creating art. But, through creating murals, it exposed Mona to a different viewpoint that focuses on “the potential of actually sharing the process with people in the street — how that could actually become a crucial part of the work itself.”

She is most notable for her large-scale murals that have been seen worldwide from the United States to Europe, ranging from more community-centered pieces to murals that focus on beautifying the area.

Mona became a central figure in the art industry due to her multi-story creation known as WEEDS, which offers commentary on how a community can resist outside sources, similar to weeds. As Mona says on her website: “Weeds may be tiny, but they break through concrete. They are everywhere and yet unseen. And the more they get stepped on, the stronger they grow back.”

WEEDS is a project that speaks volumes and could travel around the world. Mona’s creative vision can be seen in the concept of “phyto graffiti,” allowing smaller pieces of the WEEDS project to be seen in more unconventional spaces. Her “phyto graffiti” can be seen in spaces such as an abandoned building in Lisbon (Portugal). Highlighting her work in desolate areas exemplifies the similarities between people and weeds. They are both capable of growing in harsh conditions in environments that are not conducive to sustaining plant or human life. But still, they rise.

The WEEDS project highlights a community resilience component as well. Mona was invited to take her WEEDS project around the world and showcase her “long-standing social practice of direct, street-level, spontaneous community participation in her murals while actively ‘feeding’ the weeds metaphor at its root.”

This is exemplified in Marskros – Grow Together, displayed on an apartment complex in . “Marskros” translates to “dandelion” in English; the piece showcases a large-scale dandelion growing due to the strength of the apartment building’s residents.

Mona showcased her attention to detail by including drawn renditions of the community’s residents on the roots of the dandelion. Residents are a diverse group of individuals ranging in age, race and gender and religion. A group of the residents can be seen holding a sign that says, “växa tillsamman” which translates to “grow together.”

Mona’s usage of vibrant colors also conveys how a community can bring life to a place. By using a rich shade of yellow for the dandelion, viewers are immediately drawn to it, mainly due to its placement on the apartment building, which is over ten stories high.

The realistic nature of the Marskros – Grow Together piece is a defining trait of all of Mona’s work due to its ability to strike a memory in viewers from when they have seen a dandelion or another weed in the past. Ultimately, she redefines the previous idea of what a “weed” is to highlight how a neighborhood can grow strong like dandelions despite their conditions through diversity and a sense of community.

“The power of our attention to things… becomes something much more amazing than it normally would have been.”

Her work in showcasing the ability for a community to weather any storm that may come its way does also have roots in the United States and can be seen in her adopted home of California. Taking Root‘s mural features the first wildflower from barren land in Union City (CA). The placement of this mural is of significant due to Union City’s history of being a former railroad and steel town. It is now being redefined through affordable housing and giving back to the community.

Mona discussed the wildflower’s importance shown in the mural on her website. She stated that “as the building construction neared completion, the first lone wildflower I found sprouting there was a tiny Amsinckia Menziesii, which became the main feature of the mural, a symbol of resilience.” Vibrant colors and intricate attention to detail truly bring this piece to life. Due to its significant size, viewers can see the buds on the wildflower and its roots from even a distance. This allows anyone near the apartment complex to engage with the piece thoroughly.

Resilience is the overarching theme in many of Mona’s pieces. She further stated how wildflower seeds can blow in the wind and take root in new soil and bloom, similar to people who leave their homes searching for new ground to grow. Mona decided to enlist the help of the new housing complex residents — mainly immigrants — to collaborate with her on the mural. The residents were instructed to add their native language phrase for “welcome” to the mural, highlighting how the community is welcoming, regardless of individual identities.

Another interesting detail that Mona added to the mural commemorates the Indigenous heritage of the land. She included a small-scale picture of the land before it became an industrial town. Union City went from a space full of greenery that thrived from agriculture to one full of tractors, steel and factories, completely changing the location forever. Taking Root offers commentary on how a community can redefine and give back meaning to a space that has been ravaged by capitalism.

The feeling of being inspired is what Mona ultimately hopes aspiring artists and even everyday viewers of her work are left feeling. Mona emphasized the importance of understanding the power of attention, a power we all possess to elevate the little things. “The power of our attention to things… becomes something much more amazing than it normally would have been,” said Mona.

Mona Caron is an artist who seamlessly combines her political and social views in her art that exemplifies how even ordinary individuals can create beauty in the world. Through her work, she offers a different narrative for the art industry. This narrative is created by a community of everyday people who strive to make beauty wherever they go. 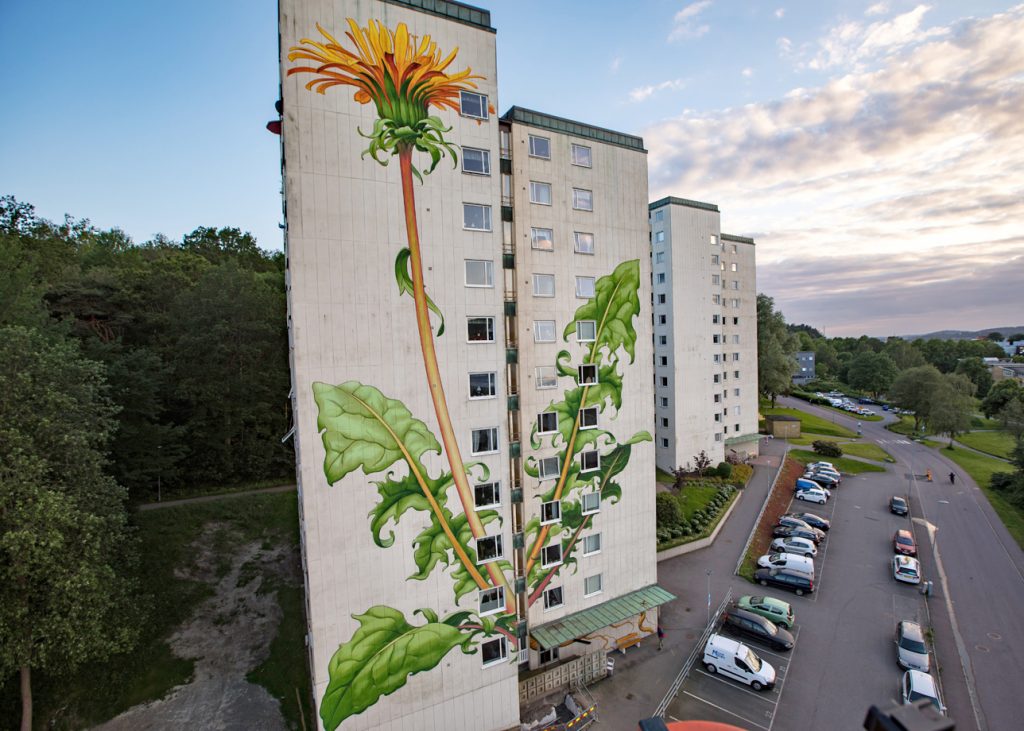 People in Metro NYC can now see one of Mona Caron’s most recent creations towering above the Jersey City (NJ) skyline.

by Jessica Bond February 21, 2022
Jess joined FF2 Media as a 2020 graduate of Temple University's journalism program. She has a passion for the arts and using writing as a tool to spread awareness on social issues, independent and small artists. She is a 2021-2022 Fulbright recipient to the University of Sussex, getting her MA in Media and Cultural Studies. She hopes to become an international journalist focusing on local communities and showing the beauty within them.
Previous Post Next Post