Set at an institution dedicated to reversing “species dysphoria” — an actual psychiatric syndrome, albeit a rare and under-researched one — Wolf challenges audiences to reflect on matters of identity and their impact on ecological relationality.

The institution resembles a treatment center specializing in conversion therapy, with its emphasis on psychodynamic talk and aversion exercises in a clean and sterile compound. In contrast to the lush forest that isolates the compound from the judgment of society, inside the institute is a plastic imitation of the natural world. The design of the institute’s “park” is filled with fake flowers, fake turf, fake trees, and a lifeless pool of water serving as a fake pond.

Glass walls separate this world from the living field of grass and wildflowers and the forest beyond the fence. Long, unmoving, wide shots of the field and forest remind us that the natural world is always on view for the patients, but always out of reach. Instead, they’re forced to hover between identities, poorly imitating both the animals they identify with and the humans their captors want them to be.

Though gender is the mainstream lens through which performance is currently acknowledged, performance is a day-to-day experience for everyone, whether that be through gender, age, career, ambitions, or a near-infinite list of other variables. We perform our identities whether we acknowledge the performance or not.

When I click into a zoom meeting, I step out of my identity as “roommate” and into my identity as “professional.” Both are authentic. Both are performed. And if I mismanage my performance, allowing my roommate identity to slip into my professional one or vice versa, things might get weird.

Performance is at the heart of Wolf. The therapists at the institute assure their patients that they will be able to live happy, healthy, human lives once they stop pretending to be animals. But the patients — a group of children, teenagers, and young adults who identify as various animals — don’t seem to be very interested in living happy, healthy, human lives. They want to behave like animals: a parrot pecks at birdseed; a horse trots, neighs, and rubs her back against a plastic bush; a German shepherd plays fetch.

Jacob, on the other hand, tries to suppress his wolfish tendencies. In his moonlit bedroom, he swallows back a howl… but he can’t contain himself. He leaves his bedroom to find an open kitchen window where he can call out to the moon. (I thought actor George MacKay did a great job, but my dog didn’t look up from the couch until faraway dogs barked back at his howl.)

George MacKay’s performance as Jacob in wolf-mode is spectacular. He crawls through the dark kitchen with a phenomenally wolf-like gait. Lit silver by the moon, his movements appear simultaneously organic and choreographed, like a dance he was born knowing. His shoulder blades rise and fall like a creeping canine stalking a sniffed-out prey.

And yet, in a diary entry, Jacob admits that his body is not a wolf’s body. “These eyes limit my vision. They focus only on the biggest things. My nose is not long enough. Smells can’t come in like they should… My fingers blister when I crawl. My knuckles bony and painful on hard ground. They are not the padded paws they should be.”

None of the patients at the institute are the animals they identify with. They are humans. But what does it mean to perform humanity?

In an overtly stylized, low-tech propaganda video that plays in the institute’s cafeteria, a snake eats a frog. The front half of the frog’s body breathes, blinks, pulses with life. The back half of its body disappears into the stretched throat of the snake. Inset screens hover over this visual: regular people doing regular things, like eating and dancing, with an uncanny, over-performed affect of happiness. Meanwhile, upbeat, low-fi keyboard music backs the cheery voice over. “What do you want to be? A beast, driven by its needs, or a human, driven by its kindness?”

Of course, this question is performative in itself. It presupposes that a human isn’t a beast driven by its needs to perform “kindness” in the instances where kindness is necessary. And often, in the world of Wolf as in our own, kindness is not deemed necessary. Dr. Mann (Paddy Considine) relishes the often-violent control he wields over his patients, just as he relishes the control he claims humans naturally hold over “nature.”

Dr. Mann is clearly the villain, brandishing leashes and carrying a taser to be used on children. We can’t help but fear him: he threatens to feed the girl who identifies as a panda only raw bamboo shoots; he shoves the German shepherd’s face into a puddle of urine. How can we agree that Mann is fit to rule over nature, when Mann is a violent, predatory, territorial creature himself?

So far, Wolf has been poorly received by critics. Rotten Tomatoes gives it 45% Fresh (meaning “rotten). Michael O’Sullivan at The Washington Post gives it two stars. So does Carlos Aguilar at Roger Ebert.com. They both have similar complaints. They think it lacks nuance. They find it a faulty allegory for conversion therapy. And they’re right.

With its uncanny propaganda videos and obvious villain in Dr. Mann (Dr. Mann), Wolf is far from subtle. It is a poor study of the queer or trans experience. But I don’t think filmmaker Nathalie Biancheri’s goal is a gender studies analysis of society.

Would those performances allow us to expand our own identities beyond just “human being” and into something more relational? Would they allow us to see ourselves as part of a whole ecosystem, rather than separated from it by glass walls? If we are able to imagine ourselves in different roles, how might our performances change?

Ultimately, Jacob may be a real wolf in the wrong body. He can’t swallow back his howl. He can’t choose to perform differently.

But I can. And if you are reading this review — rather than running through the forest or howling at the moon — maybe you can too. 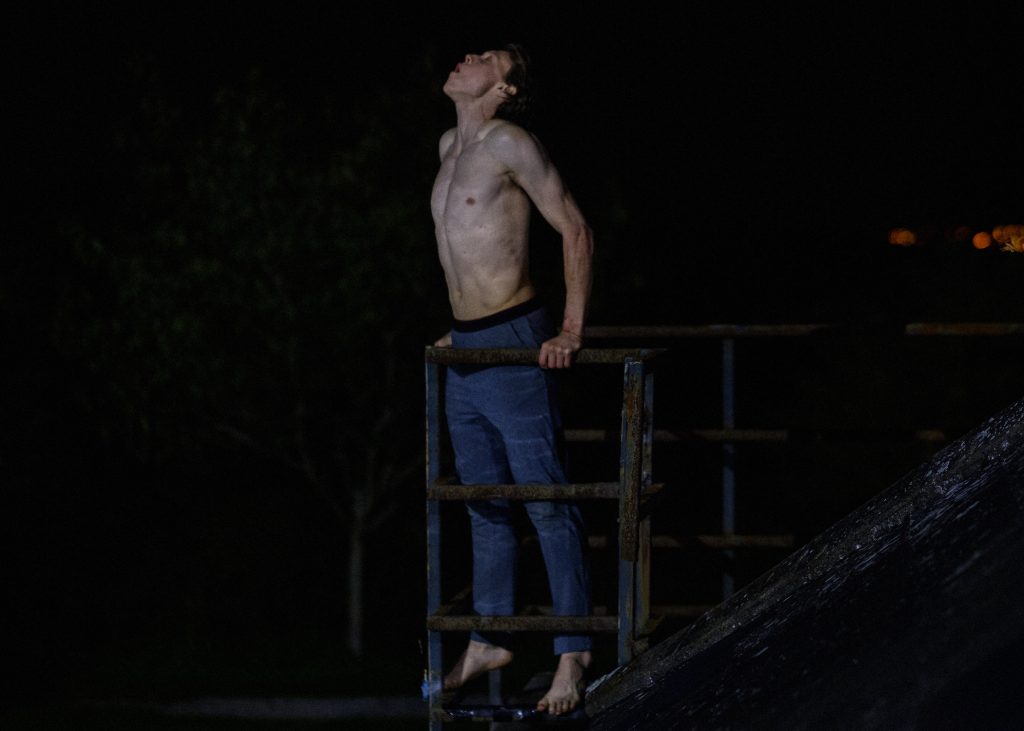 by Hannah Lamb-Vines February 10, 2022
Hannah Lamb-Vines is a poet, critic, fiction writer, and editor in Berkeley, California. She received her MFA in creative writing from California College of the Arts in 2021. Her poetry has been published in or is forthcoming from Columbia Journal, HAD, Black Telephone Magazine, Shit Wonder, and Bennington Review, among others. She is an interviews editor for Full Stop magazine.
Previous Post Next Post