Celebrating the Life and Legacy of André Leon Talley

André Leon Talley, the influential fashion journalist known for his iconic personal style and larger-than-life personality, died at the age of 73 on January 18 at a hospital in White Plains, New York after suffering a heart attack. Rather than mourn the death of this beloved change-maker, though, I’d like to celebrate the remarkable life that he lived.

Though perhaps best known for his role as fashion news director and later creative director and editor-at-large at Vogue, André’s six-decade career saw him wear many hats – author, public speaker, curator, and television personality. Called a “creative genius,” he shattered glass ceilings simply by being unapologetically himself – a gay Black man – in an industry ruled by white elitists.

Born in 1949 in the then-segregated American South, André lived a relatively sheltered life in the home of his hardworking grandmother. It was at the local church service, where everyone donned their Sunday best, that he was first exposed to fashion. After receiving a bachelor’s degree in French literature from North Carolina Central University, and a master’s degree in the same subject from Brown, he moved to New York City. Career-driven, he ignored the party scene and landed an unpaid job working for Vogue magazine’s editor-in-chief Diana Vreeland, who would later help him get a clerk job at Interview magazine.

André moved on to a job at Women’s Wear Daily, and then the New York Times before moving back to Vogue, this time with a salary. As a higher-up, he urged designers to include Black models and decried racism in the industry. A trailblazer in both the Black and queer community, André was a force to be reckoned with. During his life, he was publicly recognized for his achievements, receiving the 2003 Eugenia Sheppard Award for Fashion Journalism as well as an honorary Doctorate from Savannah College of Art and Design in 2008. In 2011, a gallery at the SCAD Museum of Art was opened in his name.

Called a “creative genius,” André shattered glass ceilings simply by being unapologetically himself – a gay Black man – in an industry ruled by white elitists.

Having only known André as a judge on Tyra Banks’ reality show, America’s Next Top Model, I hadn’t realized what an icon he was. That was until I watched Kate Novack’s documentary The Gospel According to André. Released in 2017, the film tells André’s story from his own perspective while exploring the social impact he made in the fashion industry and in the world.

Novack does a great job of balancing nostalgia with social and cultural and political commentary while showcasing André’s wonderful flamboyance and at once sumptuous, elegant, and unique style.

With the loss of André Leon Talley, I find myself revisiting Novack’s film and marveling at the extraordinary life he lived. Four years after publishing my initial review, I’d like to reiterate a sentiment I still hold:

“Be confident and unapologetically you. Clearly, it worked for André.” 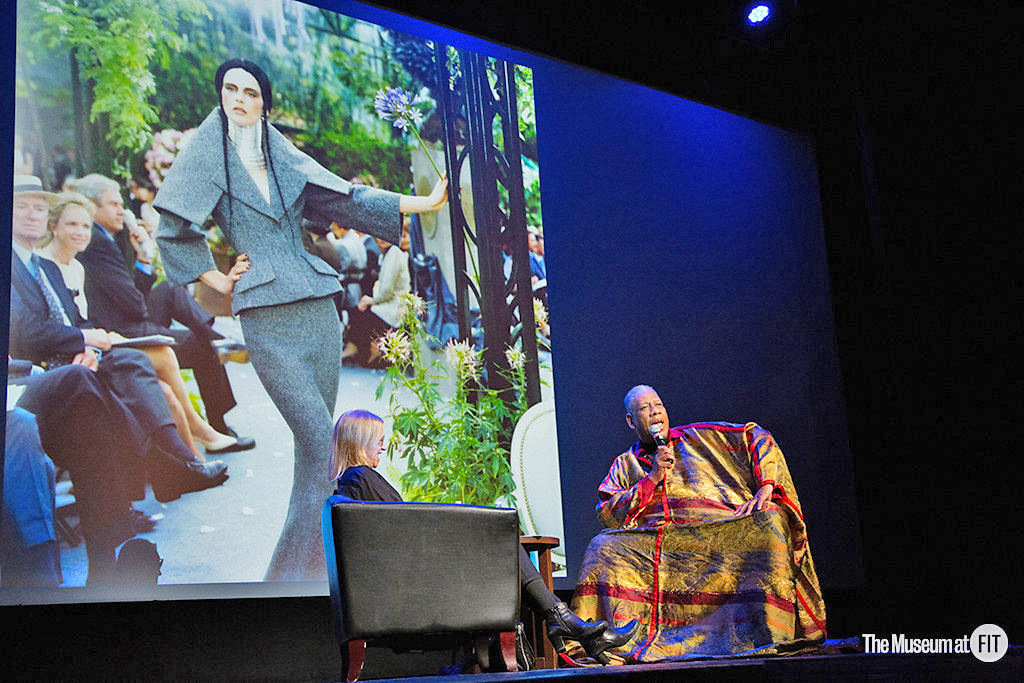 Follow this link to read my full review of Kate Novack’s documentary The Gospel According to André from 2017.

Featured Photo: André Leon Talley from Magnolia Pictures EPK for The Gospel According to André.

(From Flickr: “On December 4, 2019, André Leon Talley and Valerie Steele came together to discuss John Galliano for Dior (Thames & Hudson), the new book showcasing John Galliano’s creations for the House of Dior, captured in inspiring images by celebrated photographer Robert Fairer. The unforgettable designs, which have become collectors’ items and form a key chapter in the history of the House of Dior, are widely recognized as some of the most breathtaking and imaginative collections ever created.” Photo by Eileen Costa)

by Roza Melkumyan January 25, 2022
As a member of the FF2 Media team, Roza writes features and reviews and coaches other associates and interns. She joined the team as an intern during her third year of study at New York University. There she individualized her major and studied narrative through a cultural lens and in the mediums of literature, theatre, and film. At school, Roza studied abroad in Florence and London, worked as a Resident Assistant, and workshopped a play she wrote and co-directed. After graduating, she spent six months in Spain teaching English and practicing her Spanish. In 2019, she spent a year in Armenia teaching university English as a Fulbright scholar. She has continued to live in Armenia, and loves every second of it. Her love of film has only grown over the years, and she is dedicated to providing the space necessary for female filmmakers to prosper.
Previous Post Next Post