Janis Joplin: Ode to Your Star in Our Feminist Firmament

by Katherine Factor
Arts: Performing Arts SWAN of the Day
No comments

Janis Joplin is a musical and feminist queen the likes of which are unmatched, and about whom much has been discussed, including in biography and film by women (see links below). A writer like me might wonder what else can be said about her, so I’ll praise instead.

Happy Birthday, Janis. You would have been 79, surely singing your way through a confusing world, lovingly looking back on the feminists and musicians you helped to birth. You broke the molds of both the male-dominated music world and of a “sweet-and-doting” stereotype for women. You broadened femininity, liberating “troublemakers” and witches — your life taught us to explore our power. In a postwar America, that wasn’t easy to do.

Especially for you being raised in Texas in a segregated Port Arthur. You were targeted as a teen for becoming a beatnik. Luckily, Odetta, Big Mama Thornton, Leadbelly, and Bessie Smith (whose epitaph you recovered) filled your ears so you could eventually fill up our air—and our hearts. Their notes transcended color lines, you took them in and turned the Blues into Rock. You endured ridicule and hurt and turned it into music.

When Chet Helms cajoled you out of Texas for San Francisco and gave you Big Brother, you lost your family but seeded a cultural revolution. 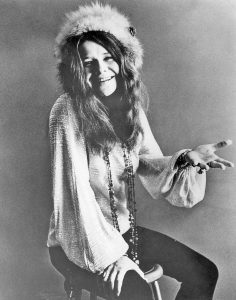 Janis our star burning with boldness. you ascended to fame in 1967 and then burst into flames three years later.

Your hits are a part of the American Rock ’n’ Roll role call: “Bobby McGee,” “Piece of My Heart,” and “Cry Baby.”  But there’s so much more to you than these songs; more to memorialize than your addiction and death, more to contextualize you in than a “familiar portrait of the screwed-up star victimized by the era she symbolized.”

It’s a life lost that we wonder about. Surely you would encourage people to dance with abandonment, as you managed to do at The Royal Albert Hall in 1969. Perhaps you would live in Brazil, where you fell in love with a soulmate, embraced carnival and its feathers. Hopefully, somehow, there would have been another Festival Express train tour. Maybe you would run a rehab. Perhaps you would’ve found the life partner or maybe you’d bop around the beds of women and the likes of Dick Cavett and Pigpen. You’d be irate to know America is not anti-racist enough; sad that the Chelsea days are done; many of your friends have passed; your beloved San Fran is gentrified — for example, Chet’s Avalon Ballroom, where you reigned, became a set for MTV’s Real World.

But Janis, the world was made better from your swagger and bawdiness,  the sultry aggression in song, the salt of the earth you brought to whiteness.  Your soul soared and we can’t ask for anything more.

You’ve been gone 52 years, lost from us as twice as long as you lived. Yet you live on in American bohemia, the media, fashion; you’ve influenced the likes of  Edie Brickell, Amy Winehouse, Alabama Shakes, Robert Plant, and Rickie Lee Jones. 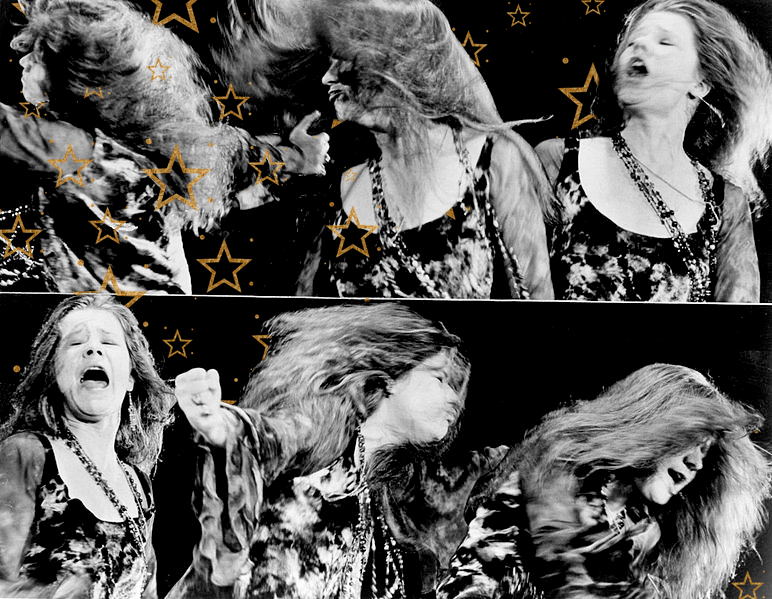 A fan website Janisjoplin.net, started by Anna in Chicago when she was 16.

Holly George Warren’s Janis: Her Life and Music book was longlisted for the 2020 Andrew Carnegie Medals for Excellence.

Featured photo is a composite created via Photoshop by Jan Lisa Huttner. Composite is based on a 1970 publicity shot now in the Public Domain.

Every Fiber of Bisa Butler’s Being

by Katherine Factor January 19, 2022
Katherine Factor is an editor, book coach, and educator. Her debut poetry book, 'A Sybil Society' won the Test Site Poetry Prize and is forthcoming from the University of Nevada Press. She has an MFA in Poetry from the University of Iowa Writers’ Workshop. The author of three Choose Your Own Adventure books, more about her work can be found at katherinefactor.com
Previous Post Next Post