Titane – the French spelling for the metal titanium –is a slasher flick which features no less than six murders in its first half-hour.

Watching writer/director Julia Ducournau’s new film wasn’t exactly a pleasurable experience for me. I frequently cringed, and had to force myself not to look away. Watching Titane is like driving too fast in traffic: thrilling, but also nauseating. And like a car accident, it makes you want to slow down and stare.

The slasher in question is Alexia, strikingly played by Agathe Rouselle in her debut feature role. From the first scene, in which a young Alexia hums along in mimicry to the roar of a moving car from its backseat, she identifies more as a car than as a person. A titanium plate is implanted in Alexia’s head after a car accident, as if in allusion to her vehicular lack of humanity. As an adult, she embodies the machines: unfeeling, determined, deadly, sexy. She’s a well-known dancer, specializing in car shows. Unable to empathize with humans, she’s sexually drawn to cars. And cars are drawn to her.

When her car impregnates her, Alexia goes on a sloppy killing spree. Then she goes on the run. Wanted signs featuring an artist’s rendering of her androgynous face are plastered all over France. To protect herself, Alexia cuts her hair, shaves her eyebrows, and, in one of the film’s many hard-to-watch scenes, she breaks her own nose. Transformation complete, Alexia poses as “Adrien,” the long-lost son of an aging fire captain named Vincent (a man desperate for love.

Thus begins a new story, the story in which Alexia learns to be human. No more does she murder. Rather, she begins saving lives by going on calls with the firefighters and learning CPR. She unwillingly becomes part of the firefighting community and part of Vincent’s family. She has to commit to her performance of Adrien in order to survive undetected as the serial killer that she is, and the commitment leads to a transformation that goes deeper than her physical appearance.

Titanium: “A metal highly resistant to heat and corrosion, with high tensile strength alloys, often used in medical prostheses due to its pronounced biocompatibility.”

Meanwhile, Vincent injects himself with steroids and tries desperately to grasp hold of a long-past youthfulness. And Alexia’s belly continues to expand beneath the wrap she uses to make herself appear boyishly flat.

That Titane is a trans narrative seems obvious, but Titane pushes hard against the definitions of “transition.” Vincent is a cis man, but as he loses the strength that makes a man “manly,” he reaches for a needle. His bruised butt cheeks remind me of a woman’s as she goes through IVF, or of a trans man’s testosterone injection sites. Alexia becomes Adrien, transitioning from an overtly sexualized androgynous woman to a socially inept young man. But that she performs “son” instead of “daughter” is less imperative to her transition than that she performs “child” instead of “car.” A car requires control to possess it and gives control to its driver. Children have no control neither over themselves nor their world.

Before she became Adrien, Alexia danced for the gaze of men who would be pulled away by bouncers if they tried to touch her (or murdered with the needle she stored in her hair if no bouncers were around). Now she learns to dance with Vincent. At first, fighting him, Alexia eventually allows him to lift her onto his shoulders and spin her around (as Sam Herring croons in a purple-lit firefighter party).

I cringe watching this scene. I am thinking of her swollen belly, wrapped in sports tape and pressed against Vincent’s back. Her expression, especially without the eyebrows, is hard to read. Is she ecstatic? In pain? Simply shocked? When Vincent sets her down, she exhales with a wide-open mouth.

At another firefighter party, Alexia stands atop a firetruck and performs a slowed down, fully-clothed version of her car show dance. Most likely, the firemen who watch don’t desire her; they think she’s the son of their boss (Vincent). Somehow, dancing for a confused gaze rather than a ravenous one leaves her far more exposed and more vulnerable. This is hardly the Alexia we meet at the beginning of the movie – the one who embodies the resistant, unbending qualities of titanium.

How do we account for this transformation? We encounter Alexia’s biological parents only five times throughout the film. First, her father, clearly annoyed with her, drives the car that crashes, leading to her titanium implant. Then, at the hospital after her surgery, she stomps away from her parents to embrace their car and plant a kiss on its window. Ten years later, the morning after her car impregnates her, Alexia’s mother kisses her on the forehead. Her father, a doctor, examines her stomach when she complains of pains. He doesn’t find anything amiss.

After her killing spree, Alexia’s father watches her from his bedroom window, smoking a cigarette, while she hikes through the gate to their home. Finally, we see Alexia’s parents in bed, just before she makes an irreversible decision.

These illustrations render her parents as ineffectual if not uncaring, unaware if not downright cold. Compare them to Vincent, who sobs as he begs Alexia-as-Adrien to speak; who takes her murder weapon from her and gives her keys to his house; who saves lives with urgency; who dances, laughs, cries, bares his bruised ass and asks her to help him with the injections; who tells her, finally, that he loves her, that she is his son, whoever she is.

Vincent is certainly in denial, if not fully delusional. But he needs Alexia, and he doesn’t hide his need. He also doesn’t hide his determination to protect her. “Anyone hurts you, I kill ‘em,” Vincent tells Alexia when they first arrive at his house. “Even if it’s me. I’d kill myself, I swear.”

This parent is extreme, but so is Alexia. It takes extremities to shape titanium. 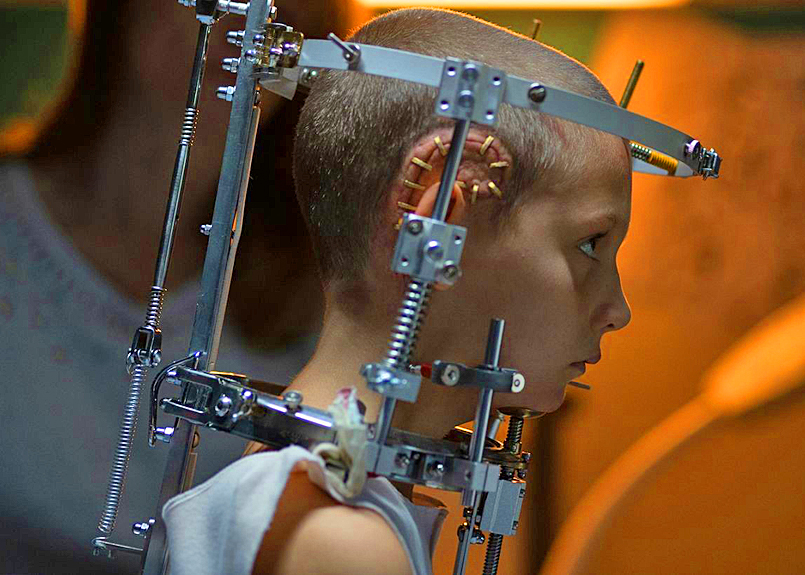 Photos of Agathe Rouselle (as Alexia) and Vincent Lindon (as Vincent) courtesy of Titane EPK. Distributed by NEON. All Rights Reserved.

Novel-in-Verse Brings Tejano Pop Star Selena Back to Us

It’s Not Too Late to Experience the Joy of ‘Fiddler: A Miracle of Miracles’

The many art forms of Sally Potter

by Hannah Lamb-Vines January 14, 2022
Hannah Lamb-Vines is a poet, critic, fiction writer, and editor in Berkeley, California. She received her MFA in creative writing from California College of the Arts in 2021. Her poetry has been published in or is forthcoming from Columbia Journal, HAD, Black Telephone Magazine, Shit Wonder, and Bennington Review, among others. She is an interviews editor for Full Stop magazine.
Previous Post Next Post