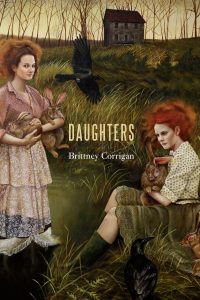 Retellings of classic mythology and folklore are abundant these days with beautiful works like Madeline Miller’s Circe (2018) and Nina MacLaughlin’s Wake Siren: Ovid Resung (2019). But after devouring these stories as a kid, I realized how problematic some of them were due to their violence and/or misogyny. Reading these new takes on the Circe and Helen of Troy characters was a breath of fresh air.

So, I was thrilled when I heard about poet Brittney Corrigan’s recently published book Daughters, which features fifty poems from the viewpoints of a wide variety of daughters. Some daughters, such as the “Mad Hatter’s Daughter” (a literary character) and “Medusa’s Daughter” (a mythological character), did not surprise me as much as others. Turns out even Bigfoot had a daughter!

I was delighted to have the opportunity to discuss Daughters with Brittney. Our fascinating conversation has been edited for clarity and length. I also added background information – in italics – for readers who might not be familiar with all of the characters we discussed. (See specific links in the LEARN MORE section at the bottom of this post.)

ES: How did this book start?

Brittney recalled how she had started doing personae work in college. (Persona poems are poems from the viewpoint of another person.) But then she put it aside for some time.

The two poems accidentally ended up being the exact same length — they were both six stanzas and six lines each — at which point I was like: “Huh, I have a project here.”

I just decided I was going to do a book-length set of daughter poems. I set myself a goal of doing 50. I kept a running list of characters that I was interested in exploring from mythology, popular culture, folklore, or even professions that I thought would be interesting to write about.

When I finished one, I would just kind of go back to the list and see who I thought was going to talk to me next. I wanted these poems to be not just straightforward in terms of what the daughters had to say. There’s often something going on underneath. So, for instance, “Alien Abductee’s Daughter” is dealing with a dad who’s an alcoholic, and “Dorothy’s Daughter” — Dorothy from the Wizard of Oz — is imagining her mother having Alzheimer’s, and, as her daughter, dealing with that.

ES: Why are these stories important?

Brittney Corrigan: It’s about rethinking stereotypes, or gender roles, or rethinking why certain familiar stories resonate with us. Maybe we should be questioning them?

Some of the subjects are worth looking at from a different angle, whether it’s some of the things that maybe we all end up dealing with (like caring for an aging parent), or it’s something more political or cultural in nature (like “Active Shooter’s Daughter” or “Death Row Inmate’s Daughter”).

“It’s a different way of bringing somebody into material that can otherwise be hard to talk about in a straight-on manner. It gives folks another way to think about it.”

ES: Could you talk about the choice of including some concrete poems like the “Alligator Wrestler’s Daughter” where the poem is actually shaped like an alligator?

Brittney Corrigan: I was committed to the six stanzas of six lines in each structure. I think in some way it helped me tell the stories because I knew how long I had and when I had to wrap them up.

I kind of kept them at that length, but even the ones that are in shapes are still six stanzas with six lines each. I knew that, potentially, reading the collection with all the poems looking the same could potentially be tedious for a reader. It was more interesting for me to sort of play with the form as I’m playing with these stories.

ES: Why did you give daughters to women – like Amelia Earhart and Medusa – who didn’t have daughters?

Brittney Corrigan: I wanted to explore these personae.

For “Medusa’s Daughter,” I wanted to explore this idea of Medusa, who gets this terrible rap, right, in all the old stories. She was really horribly mistreated and there are all these tropes around ugliness. I really wanted to humanize her.

Background: When Medusa is killed by Perseus, two male siblings fathered by the god Poseidon spring from her body: Pegasus (a winged horse) and Chrysaor (a giant with a golden sword). None of the mythological sources mention Medusa ever having had a daughter. (ES)

I wanted to play with humanizing Medusa outside of the myth she was already in, but still dealing with the core story of her – the uglification and then the vilification – when I made her a mom.

There are very few daughters in my book who are real people. They’re mostly characters. But “Unknown Daughter” is based on an actual gravestone in Mineral (WA). I don’t know if the child was a boy or girl, so in that way, that part is invented, but all the history in there about the town of Mineral is true.

ES: What do you want people to take away from Daughters?

Brittney Corrigan: Questioning gender roles. Questioning these stories that we tell ourselves and are passed down and how we might tell them differently.

The project developed, too, because I wanted it to be inclusive of many different kinds of daughters, and how different women define themselves as daughters.

In the process of writing it, it was originally going to be dedicated to my younger kiddo. Then, in the last year before the book came out, kiddo came out as trans non-binary, and they were like: ‘I don’t want this book dedicated to me anymore.’ So the poem “Not {Daughter}” was written for them.

In that process – over the last few months before Daughters came out and putting that new poem “Not {Daughter}” in this collection – it made me sort of rethink the binary of daughterhood. I was glad to have “Not {Daughter}” included, to expand the relevance to the folks who may have been born daughters but don’t consider themselves daughters anymore.

I guess just looking at the whole concept of daughterhood differently, and questioning what daughterhood means within a society, and how we can be more expansive too.

Check out all the daughter – and not daughter – poems in Corrigan’s Daughters. 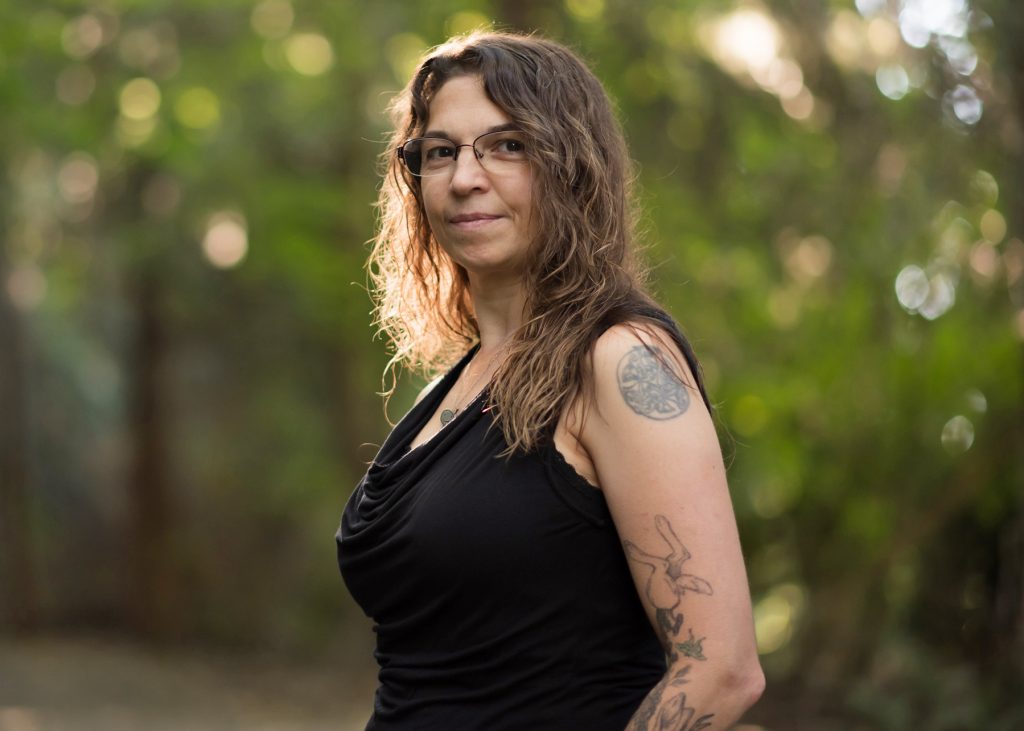 Follow this link for more background on the complex mythology surrounding Medusa.

Click here to read a 5-poem sampling from Daughters. PDF also includes a complete list of all fifty daughters included in the full collection.

Image of Medusa from Wikipedia: “Mosaic with the symbol of horror and dread: head of a Gorgon, with a penetrating gaze surrounded by snakes and with two wings on her brows. Second half second-century Tepidarium of Dar Zmela house Archeological Museum of Sousse.”

Nadia Jordan’s ‘For the Love of George’ wins at CCFF