“Ghosts All Over the Story of My Beginnings” — Jan Beatty 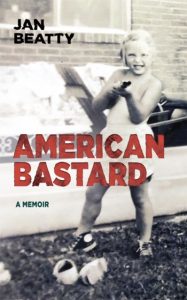 But the truth is, life doesn’t usually happen in this way. Sometimes the “story begins at an impasse” as Patrice Staiger writes. Some stories are erased at their roots. What story grows from an interrupted start like that?

We get an answer to this question in poet Jan Beatty’s new memoir American Bastard (Red Hen Press, $15.95) In American Bastard, Jan Beatty confronts her origin story: her adoption. It is a story filled with holes and misdirection — a story that has been rewritten for her by our culture.

Poetry speaks the unspeakable and Beatty employs all of her poetic gifts to tell this story in a series of short vignettes.  Previous to this work, Beatty has published six award-winning books of poetry. As she writes in one of the beginning sections, “Give me the terrible water, the gulping air—you can keep the world, with its families, its horribly solid shapes—I’ll be the ghost walking in the woods.” (41)

Beatty cannot approach something as unknowable as her birth story in a linear fashion; instead, the book wanders jaggedly through the detritus of her life. We find that the epigraph that begins the book, attributed to Patrice Staiger, is from Beatty herself. (As she discovers, her birth name is Patrice Staiger).

We see photographs of the official documents she had to fight to find. We see photographs of young children at the Roselia Asylum and Maternity Hospital in Pittsburgh where Beatty spent her first year. We see a story slowly reveal itself through metaphoric references to Robert Morgan’s book about the topography of the land.

As Rebecca Solnit explains in her essay, “In Praise of the Meander” some narratives, like Beatty’s, aren’t meant to be approached in a linear fashion: “Such books are concerned not so much with what happens but with what it means; they are less about a destination as resolution, and more about meaning revealed along the way.”

From the prologue onward, Beatty challenges the reader not to assume she knows what it is like to be adopted just because she might have had similar experiences. “Maybe you’re saying, ‘I had the same thing. My mother died when I was ten.’ Please, let me stop you. I’m sorry for your loss, but this is not that.” (13). Beatty enters the room ready to tell her story on her own terms.

What follows is a circular unearthing where Beatty lyrically exhumes her truths. “People will start calling you the lucky one, the chosen baby, no one sees that your story is gone… From now on, everyone will pretend that your first story never existed.” (19).

“We sit on basic chairs a few feet apart in this square room in this office building and start to try and speak about our lives.”

She finds her birth mother by obtaining an unamended birth certificate from the state.  They meet during an arranged meeting. In the vignette entitled, “I wear the red dress” Beatty recounts this strange encounter. “We sit on basic chairs a few feet apart in this square room in this office building and start to try and speak about our lives.” (27).

Beatty captures the strangeness between them, again addressing the reader’s assumptions, “You might imagine, you might want to make it a magical, beautiful meeting between mother and daughter—if so, you would be projecting some cultural story onto this event. I didn’t know this woman who I longed to meet and find. I had some questions.” (28).

After meeting her birth mother, questions begin to enter her mind. How could her mother have made the decision to leave her at the orphanage? What had that choice done to her? “Tell me: what happens to the body when you hand your child over—does it shake, or recoil into snake.” (46).

In their meeting, her birth mother begged Beatty NOT to find her father, claiming, “He’s not someone you want to know.” (32).  Beatty swore not to but knew she would. She digs deeper, she finds a name, and then she begins to randomly call each number she finds listed under that name in the phone book.  She ends up finding the man on her birth certificate, but soon learns out he isn’t actually her father. He’d only placed his name on her birth certificate as a favor to her birth mother.

Her father ends up being a professional hockey player her mother hooked up with after a Pittsburgh Hornets game in the 1950s. Who, though he won’t acknowledge Beatty as his child, Beatty feels a likeness to, “Growing up, I liked to hit things. A lot… I was relentless, brutal—more competitive than anyone I knew… When I found out that my birth father was a professional hockey player, it all made sense. It felt like a piece of my body dropping into place, a relief.” (207-8).

The book ends with a series of vignettes set on a train that’s crossing Canada. Beatty is hunting her father’s ghost as a way to find her way to herself. A self that before this had always been in fragments.  Now, after decades of pursuit, the words between the gaps between words have begun to show through.

American Bastard is relentless, a page-turner that one can’t put down. I devoured it in nearly a sitting; I was so mesmerized by Beatty’s story. And though from the start, we are told not to try and place ourselves into Beatty’s experiences as an adoptee, what she achieves in American Bastard is as close as it gets to understanding.

We get to feel what it felt like to be erased at the roots, and what it feels to learn how to grow again toward the light. 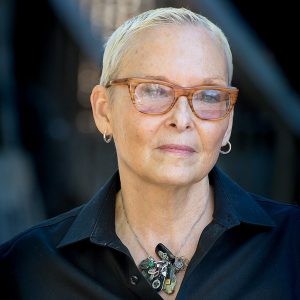 Read Rebecca Solnit’s essay “In Praise of the Meander” on LitHub.

Book jacket courtesy of Red Hen Press and used here by FF2 Media with their permission. All Rights Reserved by Red Hen Press.

Headshot of the author from Jan Beatty’s personal collection and used here by FF2 Media with her permission. All Rights Reserved by Jan Beatty.

by Iris Dunkle November 13, 2021
Iris Jamahl Dunkle is an award-winning literary biographer, essayist, and poet who lives in Northern California. She wrote the first full-length biography on Charmian London, Jack London's wife, Charmian Kittredge London: Trailblazer, Author, Adventurer (University of Oklahoma Press, 2020). Her fourth collection of poems, West : Fire : Archive was published by The Center for Literary Publishing in 2021. Dunkle teaches at Napa Valley College and is the Poetry and Translation Director of the Napa Valley Writers' Conference and is currently writing a full length biography of the author Sanora Babb.
Previous Post Next Post