by Anna Nappi
Arts: Visual Arts SWAN of the Day
No comments

“I never violate an inner rhythm. I loathe to force anything. I don’t know if the inner rhythm is Eastern or Western. I know it is essential for me. I listen to it and I stay with it. I have always been this way. I have regards for the inner voice… All my work keeps going like a pendulum; it seems to swing back to something I was involved with earlier, or it moves between horizontality and verticality, circularity, or a composite of them. For me, I suppose, that change is the only constant.”

Krasner was married to artist Jackson Pollock for 11 years. In the film, Pollock, Krasner was played by Marcia Gay Harden alongside Ed Harris in the titular role. Jan Lisa Huttner found that “Harris and Harden bring intensity and clarity to their performances as painter Jackson Pollock and his artist/wife Lee Krasner, tactfully illuminating their relationship” in her review of the movie.

However, Krasner’s marriage is the least interesting thing about her. In Amelie Lasker’s article on Pollock and the film Big Eyes—a biographical drama about artist Margaret Keane’s lawsuit against her fraudulent husband — she writes, “Krasner was a formidable figure in the New York City art scene, and she was an active partner in Jackson Pollock’s life. And although she put her own career largely on hold while married to him, Krasner went on to continue painting and winning accolades for decades after their marriage. She maintained a certain level of control of her own career, even as she devoted herself to others. [Pollock] is as much about Krasner as it is about its title character.”

In another piece by Amelie for FF2 Media, she explores the paintings of Krasner, and remarks on Pollock, stating, “Played by Marcia Gay Harden, the movie’s interpretation of Krasner is highly competent, professionally and socially. She’s an accomplished painter on her own in the studio, but she can also thrive in the grueling social scene of the art world. Her ability to connect with people and advocate for herself and her loved ones contrasts Pollock, who often deliberately sabotages himself at important social events, or procrastinates commissions or meetings. Krasner’s character in this film suggests a different way we can imagine an artist: alongside Pollock’s erratic genius, Krasner is steadier and more thoughtful. Her character suggests that an artist doesn’t have to be self-centered and demanding to have groundbreaking genius.”

Celebrate Lee Krasner today by learning more about her artwork! In Amelie’s article, she also shares that “Lee Krasner’s 1961 painting ‘What Beast Must I Adore?’ was part of her Umber Series, painted in brown and neutral tones and with aggressive strokes during a period of insomnia following the death of her mother. The title comes from an Arthur Rimbaud poem that she had quoted in crayon on the wall of her studio: ‘To whom shall I hire myself out? / What beast must I adore?’ it begins. The quote implies the necessity for an artist to belong to others (either people or forces), but it also implies that the artist maintains a certain level of control: she can at least choose what she will give herself to.” 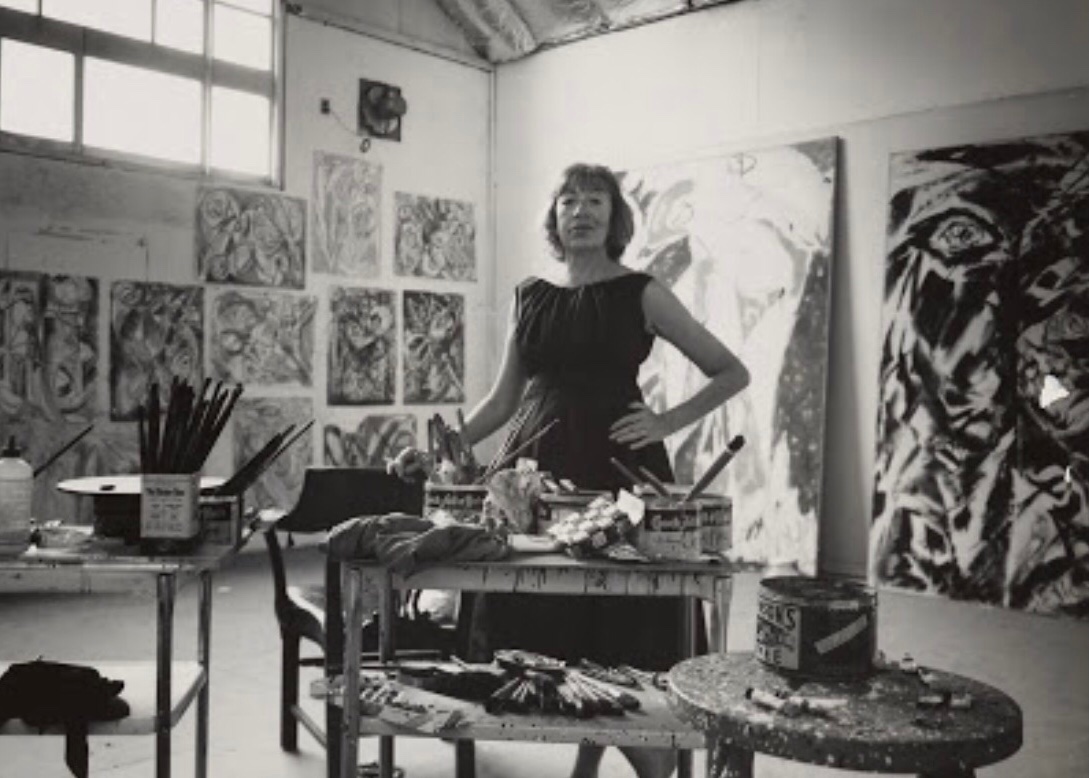 Bottom photo: Lee Kasner in her studio. From the Financial Times. All Rights Reserved.

My Gift to Babs: My Abiding Love for YENTL

Revisiting ‘Pollock’ and ‘Big Eyes’ Reminds Us of Groundbreaking Artists

Met’s ‘The New Woman Behind the Camera’: Photographers Who Always Inspire

by Anna Nappi October 27, 2021
Anna is currently a senior at Brandeis University studying Film, Journalism, and Psychology. At Brandeis, she writes for the student newspaper and is the undergraduate degree representative of the Journalism program. From theaters to museums to concert halls, she loves exploring the art world in Boston as well as in her Maine hometown. Anna is passionate about FF2’s mission and excited for the opportunity to work alongside a wonderful team dedicated to supporting women artists.
Previous Post Next Post