Live Music Returns to NYC Laden with Happiness and Tears

When Kelly Hall-Tompkins brought members of the pit orchestra from Fiddler on the Roof onstage with her for opening night at The Greene Space, the other instruments remained silent for the first several minutes of the piece. In the Rhapsody that opens the musical, the “fiddler” played solo, clear and mournful; then, the accordion echoed her, following as she played the recognizable Fiddler’s Theme, higher and higher. Then, finally, all four instruments played together in a sudden rush.

Sitting in The Greene Space’s first live audience since early 2020, I could feel the thumping rhythms in my chest, punctuated by breathtaking silence.

Hall-Tompkins, “violin soloist entrepreneur,” has been busy the past few years. Since the pandemic, she’s premiered five original pieces written for her (and counting). She’s performed online for audiences all over the world. She continues to run “Music Kitchen — Food for the Soul,” a program she founded to bring professional chamber concerts to shelters for the unhoused. She’s premiered protest music written and performed in memory of Elijah McClain, a young violinist who was killed by police in 2019.

In 2020, Hall-Tompkins was selected for the first cohort of WQXR’s Artist Propulsion Lab, a platform and grant program to support early- and mid-career musicians in New York City, first inspired by the closing of music venues during the pandemic.

This October, Hall-Tompkins gave a concert marking the return to in-person performance for WQXR’s Greene Space. She played a delightful variety of music, explaining the personal significance of each one: a Debussy for violin and piano, which she loves because “it flows through moods so quickly;” an original contemporary Flamenco piece by Guy Mintus, which she chose for its “seriousness, rhythmic flair, and harmonic color.” She even premiered a piece, “My Mother’s Menorah,” for which she had been commissioned by the musical The Odd Potato, which was recorded for Broadway but never produced.

After playing the “fiddler” in Broadway’s Fiddler on the Roof, Hall-Tompkins was inspired to write and record the first-ever Fiddler solo album, titled The Fiddler: Expanding Tradition. She left her mark on the show, too, inspiring the addition of a number of new solos. She also started teaching the dancer who played the fiddler onstage how to look like he was really playing, essentially giving him mini violin lessons. Since then, she’s consulted for the traveling company for Fiddler on the Roof, shaping the role of the fiddler now and in the future.

Hall-Tompkins radiates creative energy, always teaching, always “expanding” the traditions she encounters. It was a privilege to watch her doing Fiddler’s “bottle dance” in person. In the lyrics he crafted for Fiddler on the Roof’s now-ubiquitous song “Sunrise, Sunset,” Sheldon Harnick wrote of “one season following another, laden with happiness and tears.” Surely, COVID has taught us all to treasure those words anew. 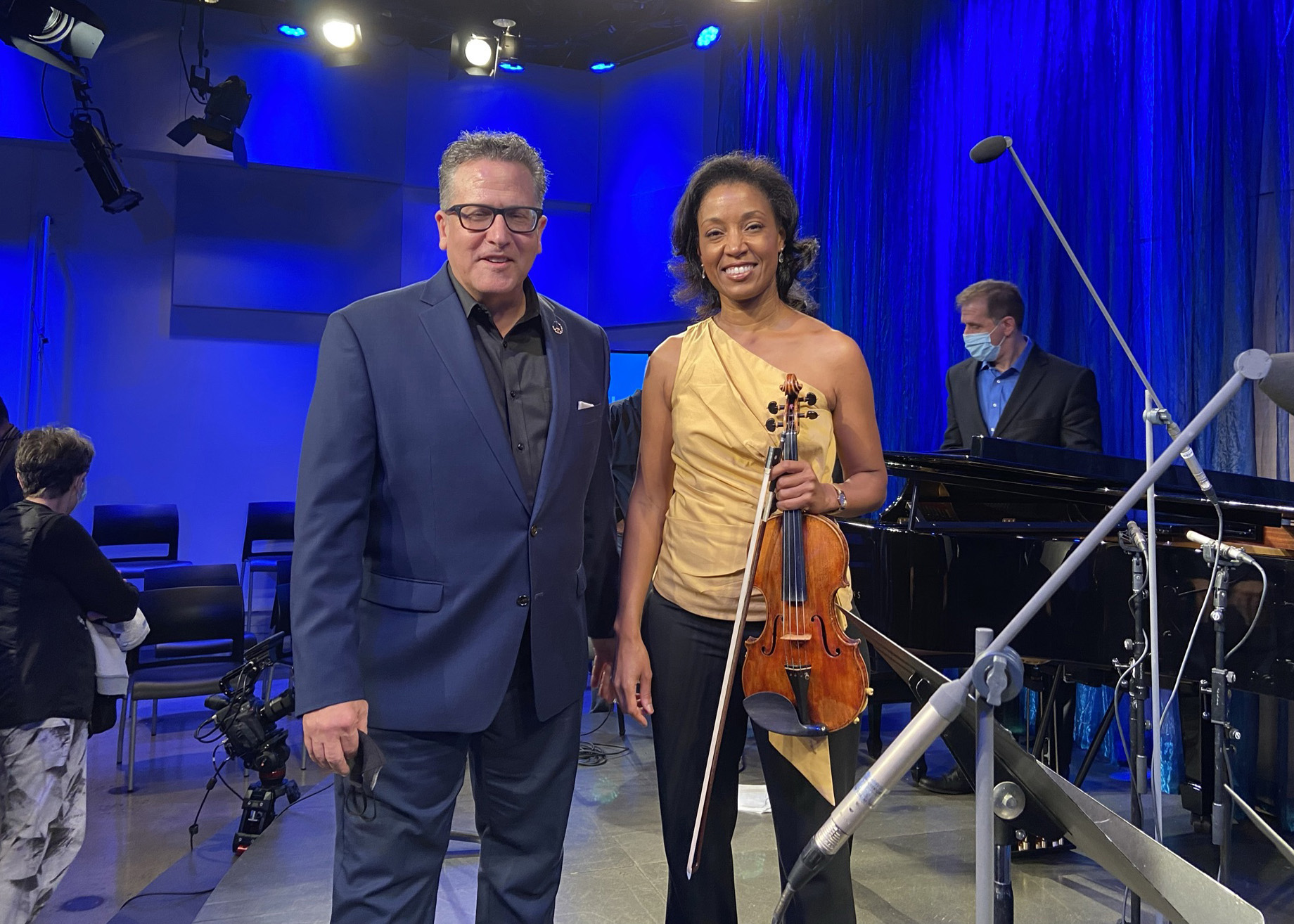 Photos taken inside The Greene Space were taken by Jan Lisa Huttner for FF2 Media © FF2 Media. Authorized for responsible use as long as the link to FF2’s webpage is included in the credit.

by Amelie Lasker October 26, 2021
Amelie Lasker joined FF2 Media in early 2016 while studying English and history at Columbia University. She received her Master's in English Literature at the University of Cambridge in 2019 and became a Contributing Editor at FF2. Her work with FF2 has earned her Rotten Tomatoes accreditation. Now, she is FF2's Brand Coordinator, developing iSWANs campaigns. Amelie is an artist herself; she is a produced playwright and fiction writer.
Previous Post Next Post