The Photography of Hansel Mieth: The Story Is in the Roots

I first encountered the photographer Hansel Mieth at the Sonoma County Museum in 2015 while I was researching and writing a biography about Jack London’s wife, Charmian Kittredge London. Mieth and her husband Otto Hagel moved to Sonoma County in 1941, inspired by their favorite writer, Jack London. London died in 1916, but his widow, Charmian, still lived on their ranch, and soon Hansel and Otto befriended her and often photographed her and the ranch. That day, I found those photographs, but I also found a world of narrative photography I had never seen before, one where Mieth used her camera to fight for social justice.

Johanna (nicknamed Hansel by her father) Mieth was born in 1909 into a poor, religious family in Oppelsbohm, Germany. She later moved to Fellbach, where she met Otto when she was a teen.  Both felt like outsiders, and they forged their fathers’ signatures to obtain passports. They fled their small town to jump trains with a band of street kids and explore everywhere from Vienna to Yugoslavia. Along the way, they documented what they experienced taking photos. When they returned to Fellenbach, Nazism had taken over their community. The teens were pulled in for questioning.  If they wanted to survive, they realized they’d have to get out. Otto found work on a merchant ship that left Bremen for America and jumped ship in Baltimore.

Hansel, whose family needed her financial support, wasn’t as lucky. She worked a grueling twelve hours a day in a sewing factory until she could save enough for passage. Once in America, Otto encouraged her to buy a bus ticket and meet him in San Francisco. But, Hansel’s years on the road in Europe had sharpened her instinct toward adventure. Instead, she bought an old, beat-up convertible and drove across. She nearly froze to death, but by determination and luck, she made it to the Golden Gate, where she and Otto were reunited.

Hansel continued to document what she experienced and saw through her photography. From 1931-33, she and Otto became “fruit tramps”  working the central valley fields with other immigrants and migrant workers who’d escaped the Dust Bowl. Hansel and Otto photographed the people they lived with, showing their struggle to find a better life and not just depicting them as static victims. Hansel took photographs of the children who worked in the fields. In one, a young boy is picking cotton, hauling a huge sack, and carrying his toy gun. She knew large stories could be told through children. 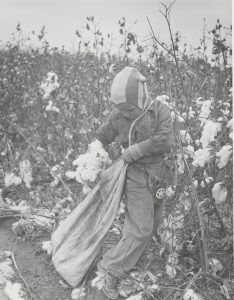 Back in San Francisco, she submitted her photos of the life of migrant workers to the Works Progress Administration (WPA). They dismissed them as propaganda. However, Maurice Mendell of the Youth and Recreation Project had a very different reaction. He enthusiastically exclaimed, “these are exactly what we are looking for!” and gave Mieth free reign to photograph whatever her heart desired. Mieth documented the lives of the immigrants of  San Francisco that drew her in.

As an immigrant herself, she connected with these communities and took photographs where their authentic selves shine through, disarmed, and open. Then, when the Longshoreman went on strike in Oakland in 1934, Hansel got a big break. Her photographs of the strike (taken from the point of view of the strikers) caught the eye of Life Magazine, and they invited her to become the second woman photographer on their staff. She did her job, photographing the subjects Life sent her on location to photograph, including animals, cowboys, Native Americans, and Macy parades; however, she also used these assignments to take photographs that complicated the simplified stories often offered in Life. As she later recalled, “it was usually the worthless stories that cost the most in stamina, anger, and frustration.” Even limited by the constraints of magazine journalism, her photographs invited readers to imagine the story that was happening beyond the edge of the photographs.

But, after years of magazine work, Hansel became disillusioned and asked Life to transfer her back to the West Coast, where she and Otto purchased a 468-acre sheep farm in Santa Rosa. They built their own home and tried their hand at chicken farming. During the McCarthy Era, they were blacklisted, and their assignments from Life began to dwindle until they just stopped. But, before she left, Mieth went on two last assignments: she documented the heart-wrenching reality of the Japanese internment camp at Heart Mountain, and she returned to Fellbach. Germany to record the devastation her community had faced during the war.

In Sonoma County, even without the backing of a media outlet, Mieth continued to document those who were voiceless in their rural community, including the Coast Miwok and Pomo. As she recalled, “living on the land…that formerly belonged to Native Peoples, we naturally became interested in ‘Indians.’ As with most American Indians, conditions are deplorable. They live in outlying Reservations and Rancherias.” Her photo essays document all aspects of life for this community, including funerals for those killed in the Vietnam War and the craft of Pomo basket making. In one photo she captures, Maggie Wahoo, a 106-year-old blind master basket maker who could still recognize not only her own work but also the work of all of the other great basket makers just by touch.

In 1973, Otto had a stroke and died. Hansel continued to live on her ranch another twenty-five years before she died at the age of 88.

What a gift I found the day I visited the Sonoma County Museum and began to see the world through the shutter of Mieth’s camera. How lucky we are to still have the wisdom of her photographs to show us how, if we look deep enough, we can find the stories of those who have somehow been moved out of the frame of our historical and cultural narrative. As the Pomo basket weavers say about the sedge, they use to weave baskets, “The basket is in the roots; that’s where it begins.” Mieth’s story and her ability to tell stories with human dignity were in her roots.

‘An Education,’ ‘Their Finest’ and how Lone Scherfig’s Radiant Films Preach Hope in Dark Times

by Iris Dunkle October 18, 2021
Iris Jamahl Dunkle is an award-winning literary biographer, essayist, and poet who lives in Northern California. She wrote the first full-length biography on Charmian London, Jack London's wife, Charmian Kittredge London: Trailblazer, Author, Adventurer (University of Oklahoma Press, 2020). Her fourth collection of poems, West : Fire : Archive was published by The Center for Literary Publishing in 2021. Dunkle teaches at Napa Valley College and is the Poetry and Translation Director of the Napa Valley Writers' Conference and is currently writing a full length biography of the author Sanora Babb.
Previous Post Next Post