With ‘Saint Jane and the Wicked Wicks,’ Kristin Lems Wants People to Know the Jane Addams Her Family Knew

Thanks to the enormous success of Hamilton on Broadway and beyond, historical musicals are having their moment in the limelight.

Now Chicago is making its own contribution with Saint Jane and the Wicked Wicks which just opened on August 26th. It’s a musical play interweaving the life stories of Jane Addams (social work pioneer and founder of Chicago’s Hull House) and Nellie Wicks (the great-grandmother of Kristin Lems who serves in the multiple roles of Playwright, Composer, Lyricist, and Producer).

The entire play was cast, rehearsed, recorded and mixed together during the COVID Pandemic, therefore everything took place remotely. It’s available only online streaming for free (though donations are accepted).

ES: Why was it important to tell the story?

Kristin Lems: I have a strong personal family connection to Jane Addams and Hull House because my grandmother was one of the so-called “Hull House Children.”

My grandmother — along with her older sister and her younger brother — attended the Mary Crane Day Nursery. They were kind of raised by the Hull House women, because their mother, Nellie Wicks (my great-grandmother), had incredible problems keeping a job and bringing home enough for the family because she was a single mom. My grandmother always told us about the Mary Crane Day Nursery and what it meant to know Jane Addams. Jane Addams made a huge impact on our family. She was kind of the household saint, you might say.

We also had these very precious artifacts. One of them is a signed photograph that Jane Addams gave to my great grandmother Nellie Wicks in about 1931. Then also [I have] a photograph of my mother at three months of age being held in her arms by her mother (my grandmother), wearing a sweater knitted by Jane Addams. That also is something that is extraordinary to me — that Jane Addams knitted a sweater for my mother. My mother [has told] us with embarrassment that when she was about two years old, she took scissors and started trying to trim it, and then the whole thing unraveled. So, we don’t have it anymore, but we do have a beautiful photo of it. 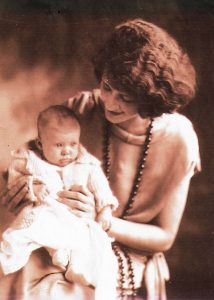 Then I started getting interested in my great-grandmother, whom I’d never met. I now have in my possession her handwritten diary and she talks about her relationship with Jane Addams and what Addams meant to her. I also have two novels written by my great aunt, that’s my grandmother’s older sister, Florence, and my grandmother who wrote a novella all about those early years with Jane Addams.

When I put that all together, I just thought, these are all family stories that maybe we can reach a larger audience. Maybe I’m the one to do that. I’m a songwriter and composer, and also an author. So, I took a couple of classes with the Chicago Dramatists so that I could weave the stories into a play.

ES: Why did you choose to interweave Addams’ and Nellie’s stories?

Kristin Lems: What you kind of come away with, which is the case for so many historical studies of women, is that Jane Addams wasn’t just a saint, she was also a human with her temper, and with her preferences and irritation and everything else.

Poor Nellie Wicks wasn’t just a sinner, either. They both made choices and had a wonderful intersection that helps them both. Society would have painted Jane as a saint and Nellie as a sinner. But the truth was somewhere in between; Jane was as good as we think — and even better. But Nellie was also doing her very best and had moments of heroism, along with trying to be a free woman.

I did a heck of a lot of research into [the lives of] both of these women. In 2017, I had a sabbatical through my university (National Louis University), a six-month sabbatical to research Adams and family tree at the Chicago Historical Society, the Chicago Public Library, and the University of Illinois Chicago Library, [along with] various online sources.

It is not just off-the-cuff and it is very well researched. So [the musical] will stand up to historical scrutiny. Obviously, I don’t know what Jane Addams and Nellie said to each other, or [if] they never sang to each other. But a lot of it is founded very, very closely on what happens.

I know when the younger brother of my great grandmother’s Nelly Wicks was born. [It’s] the night that Jane Addams and Ellen Gates Starr and Julia Lathrop rushed out of Hull House in the middle of the night across the street to help Nellie chase away her alcoholic father [with umbrellas] who was trying to beat her mother while she was giving birth. We know exactly what night that was because it’s in the Cook County records. That’s how the relationship began between Jane Addams and the Wicks family. My family would always say, “Oh my goodness, nobody could believe this.”

ES: What do you want people to take away from the musical?

ES: What’s in the future for the play?

Kristin Lems: There are definitely a couple of inquiries for doing a staged reading. If and when the pandemic ever winds its way into oblivion, I plan to shop it to some theaters. My first choice would be Rockford University. It’s just natural because Jane was a graduate there. After that, I just love to have it hit Chicago.

Click on Saint Jane and the Wicked Wicks and stream it today.

We can’t wait to see what happens next with the play. 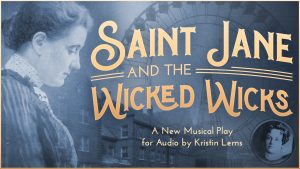 NOTE: This interview has been edited for length and clarity.

All photos courtesy of Kristin Lems. Used with permission. All Rights Reserved.