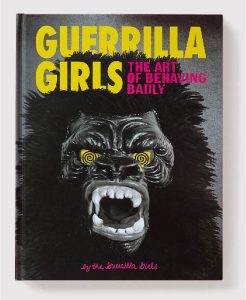 For one, the Guerrilla Girls mask in gorilla face, occludes identity, and they are a fierce feminist force — one fighting for fairness in the art world. The Guerrilla Girls have been dismantling the dominant paradigm of male representation in art, whether the inequality comes from choices made by gallery owners and museum boards, exhibits, auctions, the male gaze, or male artists themselves.

Their new book, Guerrilla Girls: The Art of Behaving Badly (published in 2020), covers their pushback by showcasing their “artivism.”

Since the 1980s, the Guerrilla Girls have reimagined a different world, demanding justice through the use of street art, mock campaigns, performance, and public text. Guerrilla Girls: The Art of Behaving Badly showcases their mediums over decades: posters, billboards, banners, ads, missives, and “exhibits.”

At first glance, The Art of Behaving Badly looks like a coffee table art book — it’s the expected size and the style of the cover is pop art or low-brow. The reader is confronted by an angry, dizzying gorilla face. We must then consider the homophone at work:  “guerrilla” is an unofficial group of fighters, often used in activist circles as ‘getting creative’ when bucking systems, and “gorilla” is the great ape to which we are related.

The Guerrilla Girls wear gorilla costumes to keep attention on their work and not on who they are. . .but also to buck identity at large, particularly the systems that determine what identities and genders are seen and heard. They keep hidden identities using gorilla masks to focus their work on elevating the identities of those ignored by the art world.

Although art is generally digested in terms of the viewer’s pleasure, the selling of art is often based on name recognition. To embody the resistance to hierarchies and labels, the Guerrilla Girls purposely don’t have a plethora of “info” available; the intend for their artivism speaks for itself.

Once we open the pages, however, readers are asked to directly face the facts: Sexism is a systemic issue in the art world. Women are exhibited less than men and mentioned fewer times by art critics; Women artists are paid less than men and are less likely to be gatekeepers. Also, women in museums are more likely to be found as nudes depicted by male artists, than as creators of the work featured in museum galleries. 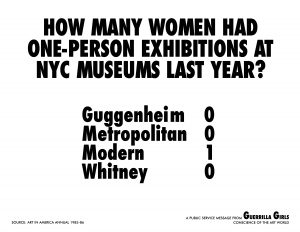 The book is visual; its narrative is unassuming, small type and text directly describing the flyer, billboard, or banner. There’s no analysis in this book; the art is the analysis. Other than typography and layout, the power is in the message. We are reminded all art is political, even when the viewer doesn’t see it…or the artist or gallery doesn’t want it to be.

The Art of Behaving Badly progresses chronologically, letting the power of the Guerilla Girls’ work evolve and accumulate for the reader, who will see the timeline, what has changed, and eventually interact with the work. It becomes obvious that not enough has changed — yet — but at the very end of the book, readers are invited in to become agents of change. Indeed, we are given a cut-out actual gorilla mask and as a final note, we are told, “to just keep chipping away.”

If you need any more invitation to join the gang of “guerrilla” feminists, here is a list highlighting their accomplishments  from each decade: 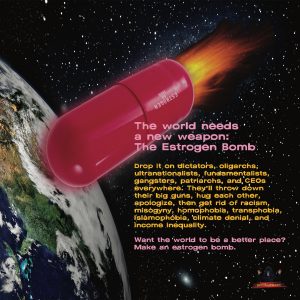 By using disruption and surprise in public spaces as their primary performance technique, while always costumed in their masked mystery, the Guerrilla Girls have achieved the cultural capital to further their cause. Originating in NYC, they have slowly expanded into an international presence by confronting spectators in Boston, Chicago, and Minneapolis in the USA, as well as in Istanbul, Krakow, and Venice. And while other countries have featured their work as major special exhibitions, the USA is behind in amplifying their work (even though they have appeared in popular places such as The Late Show with Stephen Colbert on CBS).

So ultimately — brilliantly — the publication of the book acts as a retrospective of the Guerrilla Girls and their work — one they deserve but may never get. By resisting inequality, educating, and illuminating the patriarchy within the art world, the Guerilla Girls manage to create more art in the world and even more justice.

Currently, the Guerrilla Girls are featured in Akron Art Museum’s exhibition Totally Radical. To witness a livestream discussion of their legacy and their new book, tune into this recent Facebook Live recording.

BONUS from FF2Media Editor-in-Chief Jan Lisa Huttner: I first heard about the Guerrilla Girls in 2005 when they launched their “Unchain the Women Directors” campaign (which I joined immediately). In 2006, I supported their new Oscar billboard campaign not just financially but also by collaborating with Martha Richards (Executive Director of the Fund for Women Artists) on our “Pass the Envelope Please” campaign. So, the Guerrilla Girls are directly connected with the birth of International SWAN Day in 2008. The SWAN acronym stands for “Support Women Artists Now.” Long Live the Guerrilla Girls!!! 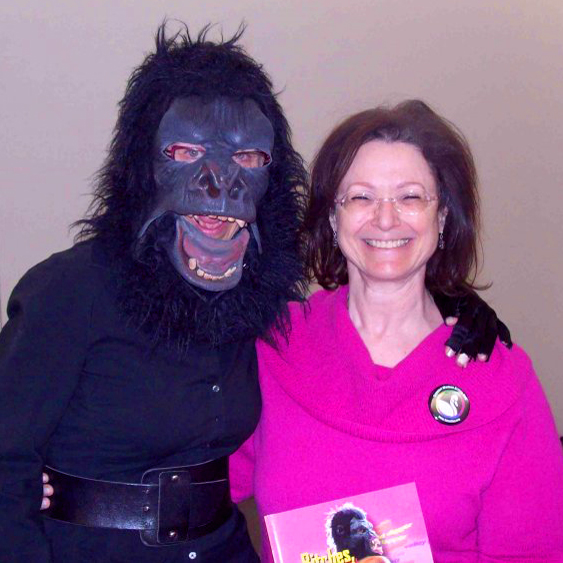 Photo: A Dream Comes True. Here I am finally shoulder-to-shoulder with one of my all-time idols “Kathe Kollwitz” of the Guerrilla Girls. Thank you Chicago Humanities Fest! Photo taken at my request by Professor Jennifer Karmin of Truman College. (11/10/09) © Jan Lisa Huttner. Private Collection. All legitimate uses are authorized by owner.

Watch at Home: ‘A Simple Favor’ & more from female filmmakers

Gavin Larsen on the Agony & Ecstasy of Being a Ballerina

by Katherine Factor September 15, 2021
Katherine Factor is an editor, book coach, and educator. Her debut poetry book, 'A Sybil Society' won the Test Site Poetry Prize and is forthcoming from the University of Nevada Press. She has an MFA in Poetry from the University of Iowa Writers’ Workshop. The author of three Choose Your Own Adventure books, more about her work can be found at katherinefactor.com
Previous Post Next Post