On a cool fall day in 1943, young photographers Hansel Mieth and Otto Hagel visited Charmian Kittredge London–the wife of author Jack London–at her home in Glen Ellen (CA). This was just five years before Mieth would become the second woman photographer to join the staff of Time Magazine. When they arrived Charmian took the couple on her sacred walk to the hillside where London was buried, and the nearby ruins of Wolf House (the home she and Jack built that burned to the ground weeks before they were to move in 1913).

Photos from that day show Charmian seated at her desk, green visor pulled low. Her desk is covered with papers and books. Notes are pinned to pieces of paper as if she is physically trying to keep her story together. But the truth is that when she died just over a decade later, that story she had pinned together would become literally unpinned, flattened, and forgotten in the archives at the Huntington Library.

I started telling the story of Charmian’s life largely due to another photograph. While I was writing my poetry collection, There’s a Ghost in this Machine of Air, I discovered that Nathanial Griffith (considered the “grandfather” of the Gravenstein Apple) had three daughters all of whom were college-educated in the 1880s. As it turned out, one of these daughters was a poet, Nell Griffith Wilson, who was friends with Charmian.

I found Wilson’s collection called, Our Valley of the Moon in poems and pictures, which included an iconic photograph of Jack London riding on horseback on Sonoma Mountain. And to my surprise, beneath it was a clear attribution: “Charmian London.”  Once I thought about it, it seemed obvious. Of course, it was Charmian who was riding with Jack on Sonoma Mountain. And, of course, it was Charmian who took the photograph. But when I reached out to several scholars to see if they knew Charmian had been the photographer, each of them gave me the same answer: they had never even thought to ask who had taken this famous photograph! 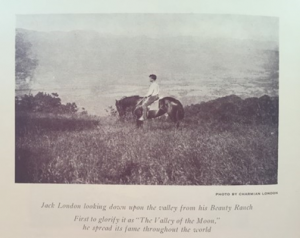 This made me start to wonder what else do we not know about Charmian Kittredge London because we never thought to ask? What followed was a six-year journey, exploring the archives and writing the first full-length biography about her. The artifacts I found told a story I had never heard before about a woman who didn’t fit the flattened description found in Jack London biographies.

Who was Charmian Kittredge London before she met Jack and after he died in 1916? Charmian attended college, traveled the world, had a high-paying job at the largest shipping firm in San Francisco before she met Jack in 1900 and started dating him in 1902.  She began her own writing career in the 1890s publishing non-fiction essays in Sunset and The Overland Monthly.  One of my most important discoveries, however, was that Charmian was not just Jack’s secretary (as had been previously assumed).  She helped write several of Jack’s books and acted as his editor beginning with his novel, The Sea-Wolf.

Charmian’s refused to adhere to the gender norms of her day. She was an avid horseback rider who thought riding side-saddle absurd. Instead, she cut one of her skirts and created a split skirt to ride astride. In researching the origin of women riding side-saddle, Charmain discovered that Anne of Bohemia (the first wife of King Richard II) rode side-saddle because she was disabled and physically unable to ride astride. Of course, the ladies of the court wanted to be like the Queen, so they also began to ride seated to the side. And, then the side saddle became the norm who women who rode horseback for the next 500 years. Charmian ended up writing an article about her findings and publishing it in the Out West in 1904. 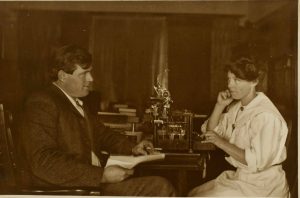 The Londons married in 1905 and settled in Glen Ellen. When Charmian traveled to Buffalo for the Pan-American Exposition of 1901 she’d met Joshua Slocum, the author of the bestselling book, Sailing Alone Around the World, and began dreaming about traveling around the world on a small boat. When she discovered that Jack shared her dream, they began planning their own adventure. After many delays, they sailed to the South Seas.  Charmian would write her first book entitled, The Log of the Snark (1915) which provided a daily log of their adventures.

Due to Jack’s serious health issues, the couple had to abandon their ambition to travel the world and return to the Bay Area from Sydney (Australia). Charmian also wrote two more books that drew from their Snark journey: Our Hawaii and Our Hawaii: Islands and Islanders. These works reflected upon the changes on the islands between 1907 and 1916 and deplored the rapid changes brought about by tourism on the Hawaiian Islands.

The couple continued to travel throughout their marriage. They sailed from Baltimore around Cape Horn to Seattle in a four-masted ship, traveled to Mexico, and took several long trips to Hawaii — all of which Charmian wrote about — including the final book project she never finished that she is working on in the Mieth/Hagel photograph: The Log of the Dirigo.  When Jack died of uremia in 1916, Charmian was left with a mountain of debt and the ranch to take care of (with the help of Jack’s stepsister, Eliza). Over the next decade, Charmian arranged for the publication of all of Jack’s finished and unfinished work and published a two-volume biography about her husband, The Book of Jack London (1921).

As the poet W.S. Merwin wrote, “When you look back there is always the past / Even when it has vanished.” Thanks to these photographs and the care Charmian took in archiving the artifacts of her life, her past has no longer vanished.  Now, when we see a photo of Charmian seated at a desk that is piled with papers, we see what is actually there: a writer and an adventurous woman whose story it is time to tell.

Featured photograph: Charmian working on “Log of the Dirigo” at her house in The House of Happy Walls, 1943 Source: Hansel Mieth/Otto Hagel Archive [98.117.5], Center for Creative Photography, University of Arizona, 1955. (Photo is used by permission of the Center for Creative Photography, Hansel Mieth/Otto Hagel Archive, Rights and Reproductions)

Middle Photo: Jack London on his horse.  From Our Valley of the Moon in poems and pictures by Nell Griffith Wilson, The Sonoma Index-Tribune Press, 1941.

Iris Jamahl Dunkle wrote the first full-length biography on Charmian Kittredge London (wife of American author Jack London) Charmian Kittredge London: Trailblazer, Author, Adventurer  published by the University of Oklahoma Press in 2020. Dunkle teaches at Napa Valley College and is the Poetry and Translation Director of the Napa Valley Writers’ Conference. Her fourth collection of poems, West : Fire : Archive was published by The Center for Literary Publishing in 2021. She is currently writing a biography about Sanora Babb.

Click on link to read Iris’s FF2 feature Once Eclipsed, Sanora Babb’s Dust Bowl Novel Demands Our Attention, which we posted on 9/9/21.

TIFF looks to Share Her Journey, change narrative of women in film

by Iris Dunkle August 13, 2021
Iris Jamahl Dunkle is an award-winning literary biographer, essayist, and poet who lives in Northern California. She wrote the first full-length biography on Charmian London, Jack London's wife, Charmian Kittredge London: Trailblazer, Author, Adventurer (University of Oklahoma Press, 2020). Her fourth collection of poems, West : Fire : Archive was published by The Center for Literary Publishing in 2021. Dunkle teaches at Napa Valley College and is the Poetry and Translation Director of the Napa Valley Writers' Conference and is currently writing a full length biography of the author Sanora Babb.
Previous Post Next Post