This summer offers a chance to appreciate the work of one of the most renowned figurative painters of the 20th century. ‘Alice Neel: People Come First’ is a retrospective of over 100 watercolors, drawings, and oil paintings by the artist, on view until August 1st, 2021 at the Metropolitan Museum of Art. After a hard year of loss and injustice experienced most acutely by marginalized communities, the show’s timing is particularly relevant given Neel’s history as a socially conscious artist. As we make efforts to move towards a more equitable future for all, there is much we can glean from Neel’s artwork.

Every painter has that one thread of interest that weaves itself into every painting, regardless of the subject. For Neel, that thread was her belief in humanism, which places emphasis on human need, potential, and inherent goodness. These principles can easily be seen in her endless collection of paintings of people from all walks of life in which she so intimately captures the authentic spirit of each person.

Neel’s pictures often display another area of her interest: the spirit of New York City, including its beauty and challenges as shown through the lived experiences of its diverse residents. Neel did not flinch away from depicting hardships and raw truth in her work, leaving behind any notions of idealization while still honoring her subjects. The subject of New York has been a muse to artists for decades, making Neel a part of a larger conversation to place. I see many parallels of place-specific storytelling between Neel’s work and Brandon Stanton’s Humans of New York project. Stanton started HoNY in 2010 as a photography project to capture New Yorkers in the city alongside a candid interview of residents’ life experiences, perhaps inspired by Neel’s approach to cataloging human experience through painting. Stanton tells us New Yorkers’ experiences through written storytelling, whereas Neel shows us purely through the visual; each is compelling in its own way.

The meaning of Neel’s paintings is found not only in the identities of the sitters but in how she painted them. Neel is so famously known for her economic approach to the medium of painting and representation itself. She leaves large areas of the canvas untouched as negative space and vacillates between drawing and painting. In a consumer culture in which we are bombarded with visual information, the simplicity of Neel’s paintings is refreshing. As a viewer of Neel’s work, I often get the sense that time is at play, both in the painter’s process and in the ephemeral nature of human life. The quintessential Alice Neel calligraphic blue drawn line frequently runs through the artist’s work. She gives a certain amount of vulnerability to her viewers by leaving apparent evidence of the painting process. Sometimes the drawn line peeks through patches of painted color, whereas other times it remains untouched and she strikes the perfect balance of representation between drawing and painting. Neel was well aware of classical traditions employed in portrait painting and rejected the notion of painting in an idealized manner. Perhaps this is why her hand is so wonderfully evident in her work. Her bravery in knowing when enough has been said leaves us with room to ponder the true subjects of her work, the human spirit. She preferred to call her paintings “pictures of people” and even once proclaimed herself as a “collector of souls”.

One of the challenges of figurative art is the artist’s representation of the sitter. Artists working within portraiture have a responsibility in their awareness of how they present their sitter while simultaneously expressing their own perceptions and assertions. You can imagine how this could quickly become problematic in situations where there are unbalanced power hierarchies between artist and sitter. The issue of misrepresentation is widespread in art history and is especially seen in the genre of portraiture painting where women are unfavorably depicted through a patriarchal male gaze. Neel challenges this history of misrepresentation by reversing the gaze and empathizes with women’s experiences rather than manipulating the image to her own ideas of what women ought to portray.  Her own experiences of sex, pregnancy, childbirth, the tragic loss of a child, and being a working mother informed her perspective in which she drew attention to long-held stereotypes of women. She innovates the more traditional subject of Mother & Child by depicting the subjects together in a naturalistic way without romanticizing expressions or activities. Neel does not shy away from all aspects of motherhood, from routine and child care to breastfeeding and beyond. When looking at past “mother & child” paintings by artists like Mary Cassatt & Berthe Morisot, the sitter’s gaze is often passive, looking away from the viewer as if they are being observed. Neel portrays mothers and oftentimes children looking directly at the viewer with complete vulnerability of emotion.

Although the feminist perspective was an important part of Neel’s work, her advocacy expanded far beyond a single group. Her dedication to humanistic principles drove her to represent communities that pushed the boundaries of living in conventional society. She painted members of the LGBTQ+ community, immigrants, people of color, pregnant women, and children; whether her subjects were neighbors, friends, strangers, prominent leaders, famous artists or actors, Neel painted her subjects as unique individuals, dignified and worthy of portrayal. As we continue activism today in 2021 for the issues Neel commented on through her work up until 1984, it is evident only a few decades later that the need for socially conscious artists remains at the forefront.

“I don’t paint like a woman is supposed to paint. Thank God, art doesn’t bother about things like that.” 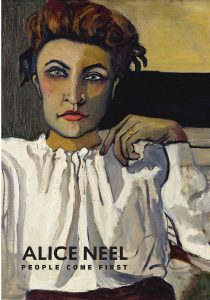 ‘Alice Neel: People Come First’ is on view at the Metropolitan Museum of Art in New York City until August 1st, 2021. See the exhibition in person or online:

Get the Catalogue for ‘Alice Neel: People Come First’ here:

by FF2 Guest Post July 1, 2021
FF2 Media welcomes Guest Posts from writers who self-identify as women. Do you have a passion that you want to write about? Send us a pitch: witaswan@msn.com. We pay experienced writers $100 for each post (of approximately 1,000 words per post). We also need interns for administrative back-up. Compensation for interns begins at $15 per hour.
Previous Post Next Post