Congratulations to Alexandra Byrne on Her Oscar Nomination

With the 93rd Academy Award nominations announced on Monday, Alexandra Byrne is now a six-time Oscar nominee for Best Costume Design. Byrne is nominated for her work on Emma. (2020), alongside Bina Daigeler for Mulan (2020), Massimo Cantini Parrini for Pinocchio (2021), Ann Roth for Ma Rainey’s Black Bottom (2020), and Trish Summerville for Mank (2020). Byrne is currently considered to be the frontrunner for the award by many experts and may soon bring home her second Oscar.

Byrne is an incredibly deserving nominee as her work for Emma. is undoubtedly some of the best of the year. Emma. is a Regency-era adaptation of Jane Austen’s novel by the same name, first published in 1815. With a script by Eleanor Catton, the film marks photographer Autumn de Wilde’s directorial debut. It follows a wealthy young woman as she attempts to matchmake for her friends and find her footing as a leader in her community. It’s full of delightful characters from Anya Taylor-Joy’s “Emma Woodhouse” to Bill Nighy’s “Mr. Woodhouse” to Josh O’Connor’s “Mr. Elton.” 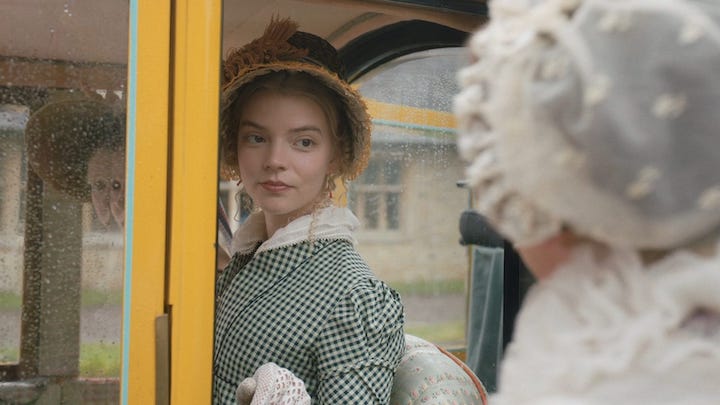 I previously discussed Byrne’s work for Emma. on the OFFSCREEN Podcast with Jillian and Sophia and in my recap here on FF2. These seem to be some of the most period-accurate costumes ever made for a Regency-era film, with empire waistlines, high collars, and an appropriate use of color. Byrne’s costumes combine with the lavish production design to create a whimsical pastel world for the characters to inhabit. Both the men and women’s costumes are beautiful.

There are also several scenes of both men and women in various states of undress, allowing a showcase of period-accurate undergarments. While we often see women dressing and undressing, it’s more rare to see a male character, like Johnny Flynn’s “Mr. Knightley,” getting dressed in a film like this. Equally uncommon is that Mia Goth’s “Harriet Smith” is clearly wearing stays, instead of a corset, which we almost never see on film.

Byrne does a great job of not only building personalities through her costumes but also reinforcing themes in the screenplay about social class. “Jane Fairfax” (played by Amber Anderson) and Harriet’s more modest clothes contrast with Emma’s fine gowns, both in fabric choices and number of dresses. Emma’s clothing helps set her apart from the rest of the town, marking her as its wealthiest member. 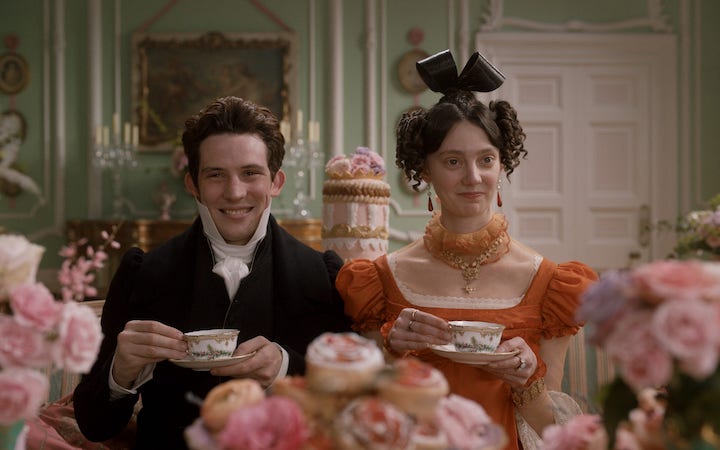 Emma. is also nominated for the Academy Award for Best Makeup and Hairstyling. It’s an impressive showing at the Oscars for a film that was released early in 2020, far before most voters were thinking about their Oscar ballots. We won’t know if Byrne will be taking home her second Academy Award until April 25, but it’s worth noting that only 15 costume designers have ever garnered more than six nominations for the Oscar. She is now one of the most nominated costume designers alive today.

Here’s wishing Alexandra Byrne the best of luck at the Oscars next month!

Stephanie A. Taylor 4 months ago

Stephanie A. Taylor 6 years ago

by Nicole Ackman March 17, 2021
Nicole Ackman is an FF2 Media Associate based in North Carolina, after living in London and New York. She graduated from Elon University with a Bachelors degree in History and Strategic Communication and from City University of London with a Masters degree in Culture, Policy, and Management. She is a theatre and film critic and is a member of the North Carolina Film Critics Association. Her taste in film tends towards period dramas, movie musicals, and anything starring Saoirse Ronan. In addition to film, she is passionate about history, theatre, Disney parks, and classic novels by female writers.
Previous Post Next Post