by Nicole Ackman
Features
No comments

As part of their special celebration with FF2 Media for Women’s History Month, OFFSCREEN with Jillian and Sophia hosted Roza Melkumyan and me to talk about Costume Design in film, and, in particular, women’s roles in it. It was a great experience, with hearty discussions and fantastic insights into the importance of Costume Design. In particular, I discussed two of my favorite costume designers: Alexandra Byrne is known for her work on Elizabeth (1998), The Avengers (2012), Mary Queen of Scots (2018), and this past year’s Emma. (2020). Jacqueline Durran is known for Atonement (2007), Anna Karenina (2012), Beauty and the Beast (2017), and Little Women (2019).

Costume Design is one of the few areas in film making that’s largely dominated by women. It’s something that even can be seen at the Academy Awards, where it’s not uncommon to have only women nominated for Best Costume Design. (This occurred in 2018 when Byrne was one of the nominees.) There are many famous female costume designers like Sandy Powell and Colleen Atwood. The most well-known, Edith Head, won eight Oscars and was the inspiration for Edna Mode in The Incredibles (2004).

Many people don’t appreciate how important Costume Design is to a film — and not only for aesthetic reasons. It’s one of the most important parts of building the world of the film, along with the Production Design. It also helps the audience know more about the characters. For example, Jenny Eagan’s costumes for Knives Out (2019) help us understand who each member of the Thrombey family is: from Ransom’s expensive but worn sweaters to Meg’s collegiate hipster outfits.

Whether the film is a period drama, a fantasy movie, or a contemporary piece, the costumes help set the scene. Joe Wright’s movies, from Pride and Prejudice (2005) to Atonement, are renowned for their beauty and romance and Durran’s costumes are a large part of that. In Anna Karenina, Durran’s structured silhouettes for the titular character mirror the societal constraints that are the heart of the story. The contrast between the lavish costumes in the city scenes and the plain, simpler clothes in the countryside scenes emphasize the other differences in those plotlines. 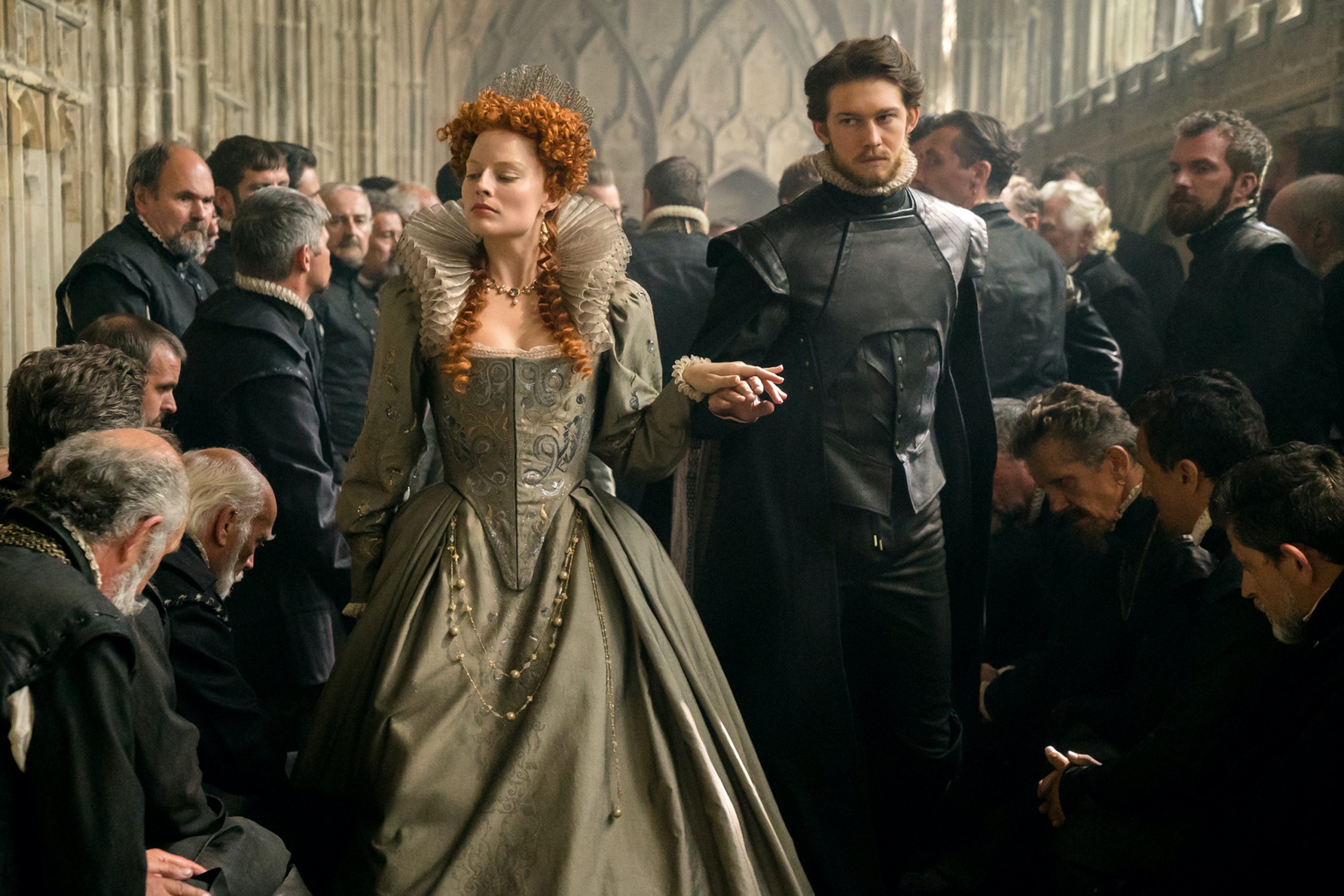 For many of Byrne’s films, she takes inspiration from the story’s source material to create costumes that immerse the audience in the settings, whether it’s a Marvel film or a period drama. For her work on the Avengers movies, she draws inspiration from the comics. Many of her looks are reminiscent of those in the comics, such as Thor’s red cape or Peter Quill’s leather jacket in Guardians of the Galaxy (2014).

Whether or not her costumes adhere to perfect historical accuracy, it’s clear that Byrne knows what the styles of the time were and is able to use her costumes to invoke a sense of that period for viewers. Her work in Mary Queen of Scots plays with period silhouettes in different textures and fabrics that help us understand more about the characters. Mary Stuart wears denim to symbolize that she is the queen of a rougher, wilder country than England, whereas Elizabeth is wearing finer fabrics. Meanwhile, Emma. is one of the most historically accurate Regency-era films ever made from its silhouettes to the use of colors. On the podcast, we discussed historical accuracy and whether or not we think it’s important in film costumes. I personally said that even though I’m a historian by background, I don’t mind a departure from accuracy as long as it’s done purposefully and not from a lack of research.

Roza shared that in her interview with Promising Young Woman (2020) costume designer Nancy Steiner, Steiner said that Cassie’s costumes help her blend into her surroundings. The partnership between costume designers and production designers is an incredibly important one.

I also discussed on the podcast how Byrne and Durran are experts at building characters through their costuming. In Emma., the costumes help show class division and how Emma herself is of a higher economic class compared to the rest of the community. Meanwhile, Elton’s high collars are as ridiculous as he is, and his wife’s styles are a bit gauche, just like her. In Mary Queen of Scots, Mary’s styles are more utilitarian than Elizabeth’s to reflect the state of their courts. Mary also wears a military armor-like dress to remind us that she’s a hands-on leader who will lead her troops into battle. 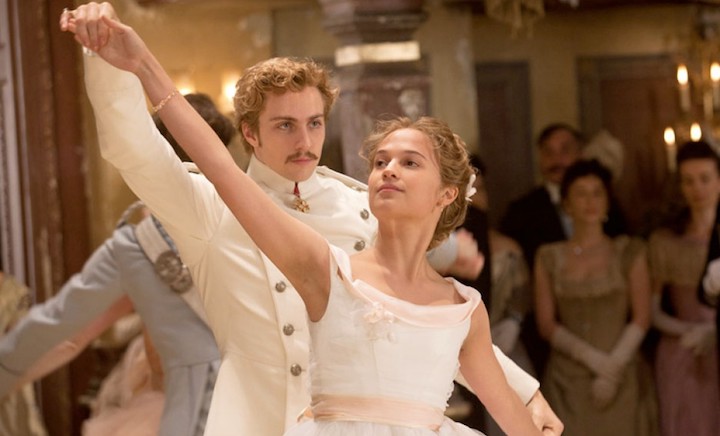 In Durran’s costumes for the live-action Beauty and the Beast, she has updated Belle’s town dress. It’s paired with boots, to emphasize Belle’s practicality, and has large pockets for her books and gadgets. In a ball in Anna Karenina, we see Kitty dressed in all white, which brings to mind innocence and purity, while Anna is in a contrasting black dress.

Durran’s work in Little Women is one of the best examples of building character through costumes. Jo and Laurie’s closeness is established through the way that they share pieces of clothing throughout the film. Notably, the waistcoat that Jo is wearing in the scene in which Laurie proposes is one that he wears earlier in the film. Amy’s fine costumes contrast with the other three sisters’, showing what a different social class she orbits.

Towards the end of the podcast, we discussed how the audience’s standards for how women are treated in film are reflected by their reactions to costume design. Our main example was the positive reaction to the battle-worthy costuming of the Amazons in Wonder Woman (2017) versus the negative reaction to the skimpier, unpractical Justice League (2017) costumes. Overall, we had a very productive discussion about costume design, its importance, and women’s role in it. The OFFSCREEN podcast was a great opportunity to spotlight overlooked but important work in the industry being done by women.

by Nicole Ackman March 15, 2021
Nicole Ackman is an FF2 Media Associate based in North Carolina, after living in London and New York. She graduated from Elon University with a Bachelors degree in History and Strategic Communication and from City University of London with a Masters degree in Culture, Policy, and Management. She is a theatre and film critic and is a member of the North Carolina Film Critics Association. Her taste in film tends towards period dramas, movie musicals, and anything starring Saoirse Ronan. In addition to film, she is passionate about history, theatre, Disney parks, and classic novels by female writers.
Previous Post Next Post