With many theaters closed across the country due to the ongoing pandemic, artists are finding other ways to reach their audiences, such as streaming filmed performances of theatre, dance, opera, and more. PEAK HD was created last year before quarantine to share productions online and on television, but has turned out to be even better than the artists involved could have expected considering the state of the world in 2020. The Martha Graham Dance Company’s Appalachian Spring was streamed alongside a new piece called The Auditions on the evening of November 8, and is now available to watch online. It is a recreation of Graham’s much-beloved work about the American frontier spirit, which continues to wow even when watching it on a screen rather than from the house of a theater.

Graham was one of the most important American dancers and created the Graham technique, which is the foundation of most modern contemporary dance and still taught around the world today. Born in 1894, the dancer and choreographer helped establish modern dance as a legitimate art form and received the Presidential Medal of Freedom with Distinction alongside many other honors from around the world. She wanted to feature more serious topics and raw emotion in her pieces than the more traditional and rule-bound ballet would allow for.

Appalachian Spring first premiered in 1944 with Graham dancing the leading role. She commissioned popular composer Aaron Copland to write the musical composition, which went on to win the Pulitzer Prize for Music in 1945. Copland was a prolific and notable American composer who wrote ballets, orchestral works, film scores, operas, and chamber music. For this piece, both Graham and Copland captured the American patriotic spirit just as World War II was coming to a close. The piece is iconically American from the Shaker tune woven throughout the music to the square dance patterns mimicked in Graham’s choreography.

The performance that is able to be watched via PEAK HD was performed by the Martha Graham Dance Company on November 14 to 17 last year to coincide with the 75th anniversary of the piece. Under the guidance of Artistic Director Janet Eilber, it uses Graham’s original choreography and a sparse set by Isamu Noguchi. The piece follows a young pioneer couple, a preacher, and a pioneer woman in an abstract storyline about both romantic love and religious devotion. 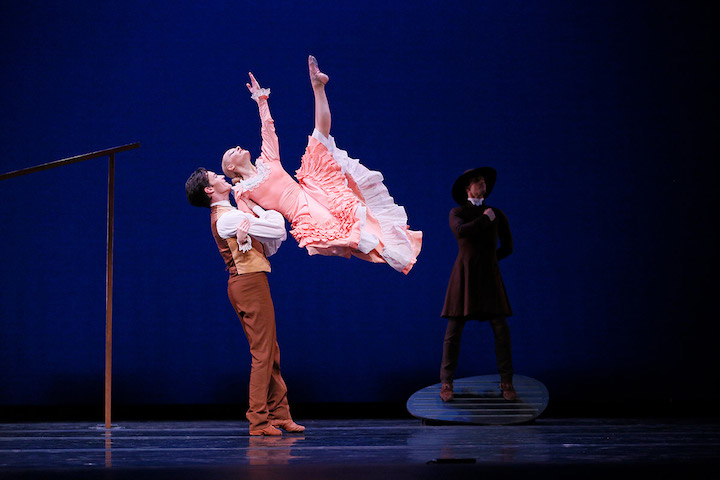 The dancers are impressive from the men’s high jumps to the meticulous unison of the four female Worshippers. The choreography is strikingly modern, even 75 years later, and yet there are motions that are familiar like the rocking of a baby and worshipping in church. The period-inspired costumes help tell the story as well, with the Preacher and Pioneer Woman’s dark clothing contrasting with the lighter colors of the couple. The Preacher’s more rigid and angular style further contrasts with the joyful fluid motion of the couple. But the standout of the show is the Bride, with her precise movements and youthful vibrance.

Peak Performances, part of Montclair State University, and WNET’s All Arts formed a partnership last year to broadcast performances for PEAK HD. The shows were filmed at the Alexander Kasser Theater at Montclair State University which has been equipped to capture performances with multiple camera angles. PEAK HD launched in October and is now releasing performances monthly from shows filmed last year and new works programmed for Fall of 2020. All episodes are available for free to watch on phones, computers, and televisions.

Naturally, there are trade-offs when watching a dance show virtually rather than in person. The energy of a live performance is missing and lifts and jumps aren’t as impressive when seeing them on a screen. The mix of wide shots of the full stage and more targeted shots give you a closer look at parts of the choreography, but also mean that you sometimes miss something that’s happening away from the camera’s focus. Of course, when viewing something in the comfort of your own home, it’s also easier to become distracted. On the other hand, a filmed production is able to give you a look at things you might otherwise miss in a theater like the details on the costumes, the intricacies of the footwork, and the facial expressions of the dancers. In Appalachian Spring, watching the streamed version gives you a close view of the Bride’s bright smile and the ruffles on her dress. The audience also gets a glimpse at the International Contemporary Ensemble playing the music.

In the 1950s, telecasts of plays, orchestral performances, and dance were common. Though they have fallen out of fashion since then, 2020 is the perfect time to turn back to them as most live performances have been cancelled. Peak HD was started before the pandemic, but it shows one way that cultural organizations can continue to connect with the arts while our theaters remain closed. They’re also a fantastic way to see a show that you might not otherwise have access to, like Graham’s classic Appalachian Spring. This gorgeous dance feels especially poignant right now as the hope felt by many in America is reflected in the story of the pioneers in the nineteenth century.

Eti Or 5 years ago

by Nicole Ackman November 9, 2020
Nicole Ackman is an FF2 Media Associate based in North Carolina, after living in London and New York. She graduated from Elon University with a Bachelors degree in History and Strategic Communication and from City University of London with a Masters degree in Culture, Policy, and Management. She is a theatre and film critic and is a member of the North Carolina Film Critics Association. Her taste in film tends towards period dramas, movie musicals, and anything starring Saoirse Ronan. In addition to film, she is passionate about history, theatre, Disney parks, and classic novels by female writers.
Previous Post Next Post