What Would Nora Do? One Last Look at Nora Ephron’s “Successful” Film Career

Nora Ephron died on Tuesday, June 26, at the age of 71. Although she had been very ill for several years, she kept her condition a secret, so her “sudden” death came as a shock to many people. Tributes began flowing into the Blogosphere, and the avalanche of anecdotes swelled as famous people with well-known names provided loving quotes for the mainstream media.

On Wednesday, the New York Times printed an enormous obituary by Charles McGrath (“Writer and Filmmaker with a Genius for Humor”) that started on page one (above the fold!), and Charlie Rose did an hour long special on PBS with clips from one-on-one interviews spaced over almost twenty years.

By the weekend, the narrative arc was set. Nora Ephron’s life affirmed our cherished “cream rises to the top” mythology. “Nora Ephron… became one of her era’s most successful screenwriters and filmmakers,” began McGrath in his New York Times obit. And he ended with this: “Among the ‘won’t miss’ items [listed in her collection I Remember Nothing]…panels on ‘Women in Film.’”

“Ignore the hype and let sobering facts speak for themselves,” I protested on my blog. “The list of nominations and awards Nora Ephron actually received in the course of her long [filmmaking] career… tell a different story.” And then I linked my post to a ListServ run by my local group for women journalists, and I added it to some relevant Facebook threads.

No one, not one single person, wrote to say she was disappointed, surprised, or perturbed in any way by the “sobering facts” in my contrarian post.

“What would Nora do now?” I asked myself? Back down and go with the flow?

Coincidentally I had just reached the tail end of A Difficult Woman: The Challenging Life and Times of Lillian Hellman (a 448 page biography by Columbia University historian Alice Kessler-Harris published last April), and in the final chapter (“Life After Death”), I learned two things:

1. In 1973, just before the release of “Pentimento“ (the second of Lillian Hellman’s three memoirs), the New York Times published a long profile of her… written by Nora Ephron.

2. In 2002, Nora Ephron’s first play, “Imaginary Friends,” opened on Broadway. The subject? Mary McCarthy’s infamous attack: “Every word Lillian Hellman writes is a lie — including and and the.” Mary McCarthy made this comment after Julia (a film based on one chapter in Pentimento) received three Oscars and eleven nominations (including Best Picture).

Armed with this new knowledge, I downloaded a Kindle copy of I Remember Nothing: and Other Reflections. Originally published on November 9, 2010, I Remember Nothing is Nora Ephron’s final collection, and reading it now, it is easy to see she knew she was dying — sooner rather than later — and she “reflected” accordingly.

“One of the saddest things about a flop [like Imaginary Friends] is that even if it turns out to have a healthy afterlife, even if it’s partly redeemed, you remain bruised and hurt by the original experience… that flop sits there, in the history of your life, like a black hole with a wildly powerful magnetic field.”

So what to do? Speak up! Make the case that one woman should make for another woman when she’s not able to do it for herself.

Here is Nora Ephron’s filmography (based on what is currently posted in the Internet Movie Database): 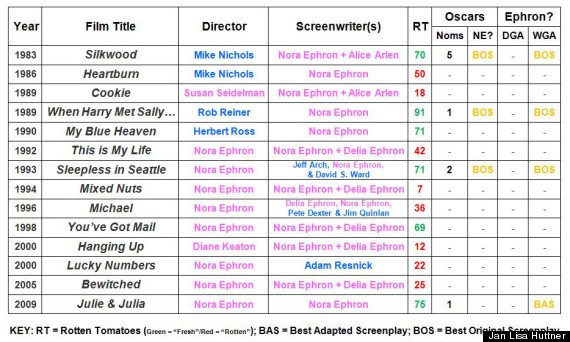 And here is Nora Ephron’s IMDb filmography sorted by “Rotten Tomato” score. Notice how all the female-directed films (including her own) cluster at the bottom: 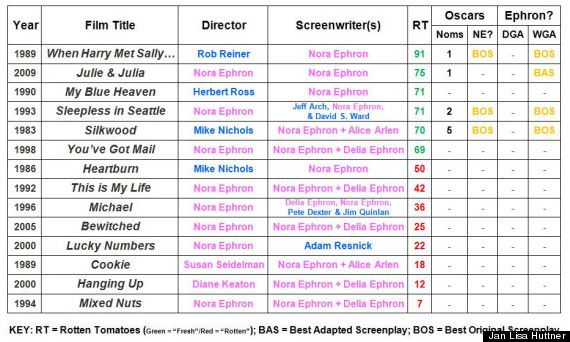 These are the facts. Now here are my answers to the pushback on my post.

“Nora Ephron got lots of awards.”

Wrong. Between 1983 and 2009, Nora Ephron wrote and/or directed 14 films, but she never received a single Oscar nomination in the Best Director category, nor was she ever nominated for Best Director by the Directors Guild of America (DGA). Three times she was nominated for an Oscar in the Best Original Screenplay category, but always for films directed by men and never for films directed by women (including Ephron herself).

Wrong. Although Ephron received a Best Adapted Screenplay nomination from the Writers Guild of America for Julie & Julia in 2010, the lion’s share of credit for the critical and commercial success of Julie & Julia went to Meryl Streep’s performance as “Julia Child” (for which she received her 13th Oscar nomination in the Best Actress category even though she was actually playing a supporting role).

For proof, note that Streep was the only person associated with Julie & Julia who received an Oscar nomination. Then compare my review of “Julie & Julia” with Michael Phillips’ review for the Chicago Tribune (“You go to a movie like this for the sauces and stews, and for the considerable pleasure of seeing (and listening to) Meryl Streep’s drolly exuberant performance as Julia Child…”), and Roger Ebert’s review for the Chicago Sun-Times (“Julie & Julia is not lacking in entertainment value, especially with the Streep performance…”). These are the two major newspapers in my market, but I could provide dozens of similar quotes if asked.

As I have already pointed out in past posts, when Meryl Streep is in a film either written and/or directed by women, she is the only person to receive an Oscar nomination. On the other hand, when she is in a film both written and directed by men, they typically get Oscar nominations too. There is only one exception to this rule: Silkwood, released way back in 1983. Nora Ephron received an Oscar nomination for Silkwood (along with Alice Arlen). It was her first screenplay, and it never happened again, even though Meryl Streep and Nora Ephron made 3 movies together.

I have no idea if this statement is true or not, I only know I rarely hear this kind of thing said about a man. For example, wherever you weigh in on the extradition of Roman Polanski, he received an Oscar nomination for Tess in1979, and an Oscar for The Pianist in 2002, and both of these accolades came after he had been arrested in 1977 for the sexual assault of a 13 year old girl.

This is not only wrong, it’s stupid. Quite apart from the emotions that naturally come from peer group validation (pride, self-esteem, etc.), awards have undeniable impact at the box office. Pay attention to trailers and posters the next time you’re at a movie theater, and you will see how often awards are hyped in marketing campaigns.

Now let’s look at 2010 again, the year Nora Ephron received a Best Adapted Screenplay nomination from the WGA for Julie & Julia, but did not receive an Oscar nomination.

Here is the list of people who did receive Oscar nominations in the Best Adapted Screenplay category in 2010:

That’s nine male nominees and one female nominee. I’ve seen each of these films, and Julie & Julia is better than all of them. It’s even better than An Education, which I loved.

• Awards matter, but women will never get their fair share until we (women filmmakers, women critics, and women in the audience) learn how to play the game. This is why organized protests are so important, for example, the online petition Melissa Silverstein of Women & Hollywood posted after learning that no films by women filmmakers would compete in this year’s Cannes Film Festival. And this is why we should all pay attention when female stars speak out, like Helen Mirren did last Monday when she accepted a lifetime achievement award at the Karlovy Vary Film Festival.

• Somewhere in the Great Beyond, Nora Ephron is cheering me on.

by Jan Lisa Huttner July 5, 2012
Jan Lisa Huttner is a Brooklyn-based arts critic & feminist activist. She is the creative force behind the SWAN Movement—Support Women Artists Now—which has just begun its third phase as International SWANs® (aka iSWANs). In the Jewish world, Jan is best known as the author of two books on Fiddler on the Roof—Tevye’s Daughters and Diamond Fiddler—both of which flow from a strongly feminist POV. She also served as both story consultant and “talking head” on the award-winning documentary Fiddler: A Miracle of Miracles.
Previous Post Next Post