“The hearing is not about reproductive rights and contraception but instead about the Administration’s actions as they relate to freedom of religion and conscience,” said an explanatory letter issued by Issa’s staff, but most women were not persuaded. Photos of this all-male panel immediately went viral and triggered a national awakening.

One week later the media should be hyping the 84th annual Oscars, but the atmosphere is uncharacteristically restrained. Instead of movie-pundit predictions and breathless articles from the fashion police, the web is filled with statistics.

Cameras flash in DC, light illuminates the darkness, and it’s not just those five Best Director nominees who find themselves caught in the glare. The names of thirteen nominees appear in the Best Adapted Screenplay category, but only one is a woman, and she’s nominated for a film (“Tinker Tailor Soldier Spy”) in which there are almost no female characters. The Best Original Screenplay category looks better (the nominees for “Bridesmaids” — two names out of six candidates — are female), but it doesn’t take much digging to learn that many of the most infamous scenes in “Bridesmaids” were added by the (male) producer and the (male) director. So exactly who is being rewarded here?

And in the Best Picture category? Eight of the nine nominees for Best Picture tell their stories from all male points of view, with wives, mothers, daughters, girlfriends, and female colleagues all pushed to the edge of the drama. Only one of the Best Picture candidates, “The Help,” has women in lead roles, and that film (although based on a book by a woman) was written and directed by a man.

But where are the women? Don’t women hold up half the sky?

Of course they do! And when cameras snap the stars as they arrive on the Red Carpet tomorrow night, and when cameras pan the audience decorously applauding each new winner, lots of women will be there on our TV screens. Beautiful women in gorgeous gowns will adorn the arms of accomplished men, but they’ll be seen and not heard — like well-raised children in a proper Victorian family.

“Shouldn’t the acting categories be collapsed already?” my male colleagues sometimes ask me. “Best Performance instead of Best Actor and Best Actress?” “Oh great,” I reply. “Then there will be no women on stage at all!”

This isn’t the time to drill down into the numbers, analyze them, and attempt a cure. Right now it’s enough to simply acknowledge the current situation, and appreciate how unfair this all is in a world in which women do, indeed “hold up half the sky.”

It’s very hard to see what’s not there. That’s why radical Islamists force women to wear burqas. That’s why Ultra-Orthodox Jews deface images of women on Jerusalem billboards. Since 9/11, complex female characters have virtually disappeared from multiplexes while Fundamentalist Christians have launched an all-out attack on reproductive rights that most Americans have taken for granted for decades. Coincidence? I don’t think so. 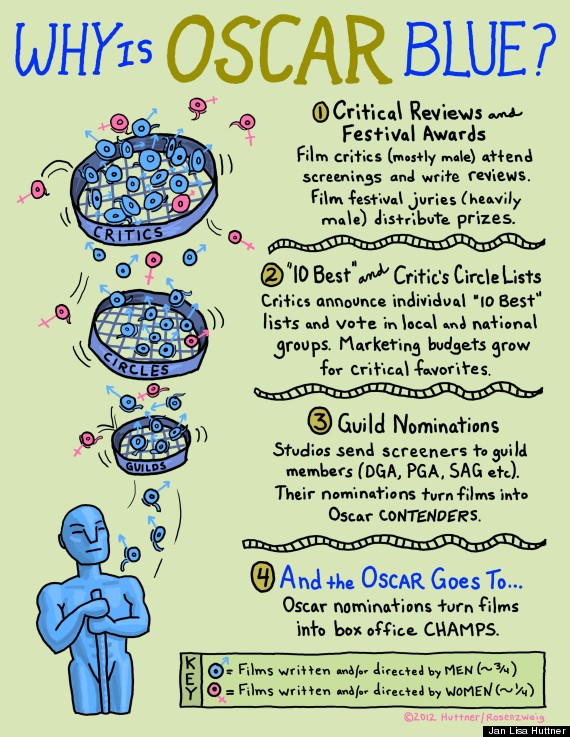 by Jan Lisa Huttner February 25, 2012
Jan Lisa Huttner is a Brooklyn-based arts critic & feminist activist. She is the creative force behind the SWAN Movement—Support Women Artists Now—which has just begun its third phase as International SWANs® (aka iSWANs). In the Jewish world, Jan is best known as the author of two books on Fiddler on the Roof—Tevye’s Daughters and Diamond Fiddler—both of which flow from a strongly feminist POV. She also served as both story consultant and “talking head” on the award-winning documentary Fiddler: A Miracle of Miracles.
Previous Post Next Post