“Women took upon themselves the responsibility to care for others,” said Yehudit Shendar when she introduced Spots of Light: To be a Woman in the Holocaust, the new exhibit at the Illinois Holocaust Museum and Education Center. “It was the task of the perpetrators to take away their beauty, but after the war many became gorgeous again.” 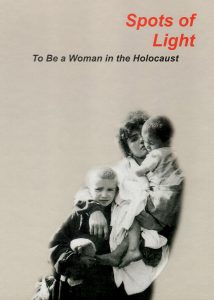 Shendar’s remarks were warmly received by the enormous crowd who came to Skokie on June 23 for “Member’s Preview Night.” Although most of the materials for this exhibit had been prepared in Israel by Yad Vashem staff (including Shendar), many objects and artworks were also donated locally. Some of these precious artifacts have never been displayed in public before, even though they are part of ILHMEC’s permanent collection.

The exhibition runs through Sept. 6. For more information, visit the ILHMEC website: www.IlHolocaustMuseum.org. The beautiful exhibition catalogue (written and edited by Yehudit Inbar) is on sale in the ILHMEC gift shop and also available on the Yad Vashem website: www.YadVashem.org.

Another excellent resource on this topic is the section called “Double Jeopardy” in Judy Chicago’s Holocaust Project: From Darkness into Light: “I plan to tell ‘the story of the holocaust’ using standard photographs… then I want to ‘paint in’ the untold story of women’s experiences of those same events…” (Page 126). 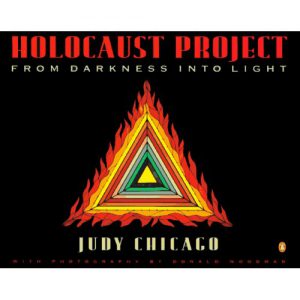 Sarah’s Key, a new French film based on Tatiana de Rosnay’s best-selling novel, takes us back to an event known as the “Vel’ d’Hiv Roundup.” Over ten thousand Jews are herded into the Velodrome d’Hiver (Winter Velodrome) while French authorities collaborate with the Nazis to arrange their transport to Auschwitz.

The strength of Sarah’s Key lies in its depiction of ordinary Parisians trapped in deplorable circumstances. Although “Sarah Starzynski” survives, she’s haunted by her wartime memories. Years later, her ultimate fate is uncovered by an American journalist (Kristin Scott Thomas) assigned to write 60th anniversary reflections.

Sarah’s Key is scheduled to open locally on Aug. 5. Without giving away the ending, let me just say that while the scenes set in 1942 are urgent and compelling, I couldn’t find the adult Sarah in the young girl already nestled in my heart.

At the end of the month, however, I strongly recommend the new documentary Crime After Crime by filmmaker Yoav Potash. Joshua Safran is a California attorney specializing in property law when he takes on a pro bono case of historic proportions. Potash follows Safran for years as he digs deep into Torah for sustenance. Since Safran is always unplugged on Saturdays, he’s the last to receive an important update at critical point in the appeal, but he returns from his Shabbat observance refreshed and renewed, so watching him battle on becomes an uplifting experience.

Crime After Crime will play on Sunday Aug. 28 (one night only) at the Gene Siskel Film Center on State Street as part of their 17th Annual Black Harvest Festival.  To order tickets, visit www.SiskelFilmCenter.com.

For full reviews of both films, visit my Blog: www.SecondCityTzivi.com.

Back in Skokie on July 10, another Sarah’s life was celebrated with joy and laughter when the Chicago YIVO Society presented Mayses un Klangen (Stories and Sounds) in honor of Sarah Rose Lazarus.

Cantor Stewart Figa of West Suburban Temple Har Zion in River Forest told a series of traditional Khelm Stories (including An Open Door and Teltse by Solomon Simon) while cellist Racheli Galay and pianist Ilya Levinson provided punctuation. Most of the musical interludes came from Klezmer Tunes with a Classical Touch by Israeli composer Daniel Galay (Racheli’s father). Then, in his grand finale, Figa lead a sing-along of Yiddish favorites (such as Der Rebbe Elimelekh), and Galay and Levinson closed with a medley of their own called Wedding Potpourri.

Born in Warsaw in 1911, Sarah Lazarus lived most of her life in Chicago. After graduating from DePaul University with a degree in music, she became a beloved teacher at both Yiddish folkshuln and local Hebrew schools. She also sang in synagogue choirs and performed at hundreds of metro Chicago community events.  Program sponsors Jerry and Debbie Lazarus (Sarah’s son and daughter-in-law) came from Denver to reminisce with dozens of her former students.