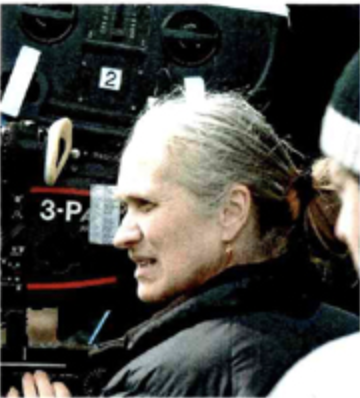 Jane Campion came to Chicago on Friday, July 24, to discuss ”Bright Star’ —her lyrical new film about the doomed love affair between tubercular poet John Keats and his muse Fanny Brawne. Film critics looking for a Keats BioPic will be sorely disappointed. From first scene to last, Campion dares to tell this story from Fanny’s point of view.

Jane Campion received a Best Original Screenplay Oscar in 1994 for ‘The Piano’, and she was the second woman ever nominated for a Best Director Oscar (one of only three to date in Oscar history). What a treat to meet one of my idols face-to-face!

Jan: ‘Bright Star’ is an incredibly passionate, doomed love story about John Keats and Fanny Brawne circa 1820. What were the challenges of taking audiences back to the 19th Century?

Jane: My security comes from responding to the Keats/Brawne story—finding it so moving, so incredibly powerful. I remember just sobbing after I finished Andrew Motion’s biography and Keats had died.

I feel a sort of sadness about it, having to deal with that problem of coming from such a different era and people being estranged from it. But at the same time, every film has to create its world and definitely the fact that it’s 1820s England has a specificity that’s kind of fun and interesting. You try to find ways to make it unique but also make it “present.” That’s the goal for me—Abbie Cornish [as Fanny] and Ben Whishaw [as Keats], in their performances, they should seem very present, very human.

Jan: Starting with the close-ups of Fanny sewing at the very beginning, taking us right into her stitching, this helps establish the rhythm of a time when things were handmade?

Jane: I think all those things were helpful and important for me, especially starting off with Fanny. Really, it’s Fanny Brawne’s “Keats” that the story celebrates. There are almost no scenes in the film that Fanny is not in. Two actually, and I sort of struggled with that for a little bit. Should we have them at all, the couple of scenes between John Keats and his friend Charles Brown where she wasn’t? That was kind of a parameter for me, just making sure that Fanny was in every scene.

Jan: Isn’t there also one scene where his friends, as a group, are deciding to send him to Italy at the end of his life?

Jane: Yes, she’s there as well, listening to that, but just being ignored by them. I found her role in it quite touching and painful too—sewing and waiting.

Jan: That’s what came out most poignantly to me—all the big decisions are being made either by Keats or by his friends, and they affect her life, but Fanny…

Jane: She has no power over them! I found that very moving about women’s lives altogether. I have a large collection, a growing collection of hand-sewn tablecloths that I really love, and I think I love them because I feel like they have been made in some way that only women make things—the hours and hours!

Jan: So the stitching represents the thing that you’re doing while you’re waiting… But when they’re alone together, Ben Whishaw looks so frail, and Abbie Cornish looks so robust and healthy. We’re used to seeing the man big and the woman petite, so it’s a bit of subversion of ordinary expectations, no? 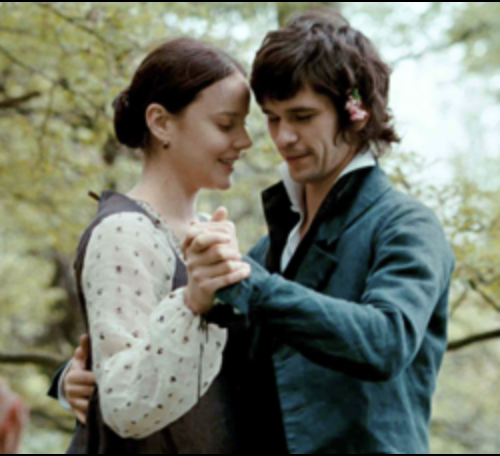 Jane: I love all that subversion of the archetypes. Love is a lot more than having perfect, cliché similarities, like him being buff and she being tiny, or whatever. That doesn’t mean too much to me; that “convention” isn’t much of a love story.

Abbie seems to me so beautiful—she’s got a full face, but she’s actually very slim. She does look healthy—the truth was Fanny probably was. And that’s just Abbie’s glow, I guess, and that wasn’t unhelpful to our story. I just love the way they both look.

Jan: Well, it jumped out at me, their physicality, Fanny looking so healthy and robust; visually I sensed Fanny becoming an embodiment of the life force for Keats, just at the point he knew he was dying.

Jane: Yes, I think it’s definitely a feeling that comes through—she so believes in him and so loves him and she is so connected to him. I think she probably really was a life force for him, and it was terribly painful for him when they were separated.

Jan: Before his friends send him to Italy, they’re separated by a wall! So much of the film is set in one house, in Wentworth Place in Hampstead (outside London), but for them, one house becomes a universe. Keats is on one side a wall and Fanny is on the other side, and all that’s separating them is this wall, except, of course, what’s really separating them is the whole weight of society…

Jane: Comes down to the wall, I know, literally and metaphorically, yes. Things for me work best when they’re both literal and metaphoric—they’re part of the story, but they carry more meaning than their literal weight. It was a very unusual situation that they had, sharing the same house. What joy to me, with my research, when I worked out that, in fact, it was probably most likely that they had shared the same bed! Keats had lived in the house, sleeping in the bed that Fanny was now sleeping in!

When the Brawne family first arrived at Wentworth Place, they had taken Charles Brown’s side of the house while Brown and Keats were away in Scotland. No one bothered or really noticed that, so those sorts of intimacies, from Fanny’s point of view, only she would be aware of them. If she would’ve shared that with Keats, he would’ve been like: “Oh my God, okay, so you were sleeping in my bed before me?”

And then the wall idea came through that, I think. I don’t know if, in the museum house that exists now, they would’ve been, really, on each side of a wall. But I put them there because it demonstrated how close they were. The fact is that they were living in the same space and sharing the same garden. They would’ve had this incredible access to each other which is really what intimacy feeds off.

Jan: And to me, you created the physical sense that two hearts were feverishly beating on both sides of this wall of convention and propriety…

Jane: Being apart, yes. I guess I’m not so jolly about romantic love. I don’t think it’s a very easy thing to be part of and I’m not sort of saying, “Well everyone should be heavily romantically in love.” What I love about this story is that they were that innocent and pure, and feeling love for each other and getting close and being connected, and then melding their identities into the Keats/Fanny identity, which is where they lost themselves. All psychotherapeutic advice would be “keep your own identity, and then merge and separate and merge and separate.” Well, they didn’t.

Jan: So what’s your deepest wish, when women walk out of the theater, what do you want them to feel?

Jane: I felt that the two and a half years of the Keats/Fanny relationship could be told in a feature length film—managed in that time and detailed from Fanny’s point of view. I felt that there was a lot that you could get of that detail that isn’t from the biography. Also, Keats’ poetry itself, include as much of it as the film could carry.

I’m hoping that audiences may connect to the delicacy, and the tenderness, and the sensitivity in the story. For me, that’s the gift of being human.

Sally Potter gets personal and political with ‘The Party’

by Jan Lisa Huttner September 29, 2009
Jan Lisa Huttner is a Brooklyn-based arts critic & feminist activist. She is the creative force behind the SWAN Movement—Support Women Artists Now—which has just begun its third phase as International SWANs® (aka iSWANs). In the Jewish world, Jan is best known as the author of two books on Fiddler on the Roof—Tevye’s Daughters and Diamond Fiddler—both of which flow from a strongly feminist POV. She also served as both story consultant and “talking head” on the award-winning documentary Fiddler: A Miracle of Miracles.
Previous Post Next Post